WASHINGTON, July 5 (Yonhap) -- The intercontinental ballistic missile that North Korea test-fired this week is a new type unseen before, a spokesman for the U.S. Defense Department said Wednesday.

"Not one we have seen before," the spokesman, Capt. Jeff Davis, told reporters.

He also said that the missile was fired from a mobile launcher and had a reentry vehicle on top of it.

The official also condemned the launch.

"It is escalatory, it is destabilizing, it is also dangerous," he said. "This act demonstrates that North Korea poses a threat to the United States and our allies and we remain prepared to defend ourselves and our allies and to use the full range of capabilities at our disposal."

He said the U.S. is confident in its ability to defend itself against North Korean threats.

After determining the North's launch is its first ICBM test, the U.S. has vowed to hold the regime accountable, called for countries around the world to tighten sanctions on Pyongyang and pledged never to accept the North as a nuclear state.

The U.N. Security Council was to hold an emergency session on the matter later Wednesday. 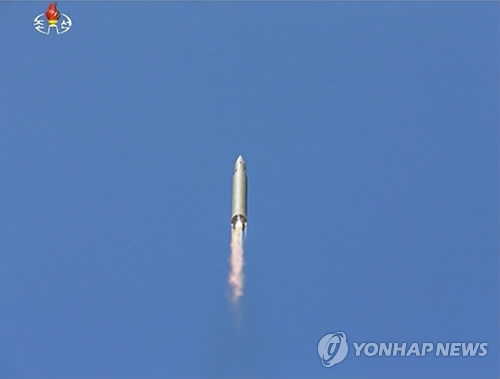