Choi hit a two-run shot in the bottom of the fifth inning against Toronto Blue Jays starter Mark Estrada at Yankee Stadium in New York on Wednesday (local time) in his first game with the Yankees. The 26-year-old was called up from Triple-A Scranton/Wilkes-Barre and added him to the active roster earlier Wednesday after the Yankees designated their first baseman Chris Carter for assignment.

Choi, who batted seventh, hit a grounder to first base in his first plate appearance in the third but blasted a two-run drive into the right-field seats when the Yankees were trailing 5-2. According to MLB's Statcast, his home run would have traveled 457 feet unimpeded.

However, the two-run home run turned out to be Choi's only hit of the game as he hit infielder grounders in his next two at-bats. The Yankees lost the game 7-6.

Choi is the second South Korean to wear the pinstripes after Park Chan-ho, who went 2-1 with a 5.60 ERA in 27 games as a relief pitcher for the Yankees in 2010.

Choi made his big league debut last year with the Los Angeles Angels, hitting .170 with five home runs and 12 RBIs in 54 games. After being released from the Angels, he signed a minor-league deal with the Yankees and was batting .289 with eight homers and 43 RBIs in 56 games at Scranton before earning the promotion. 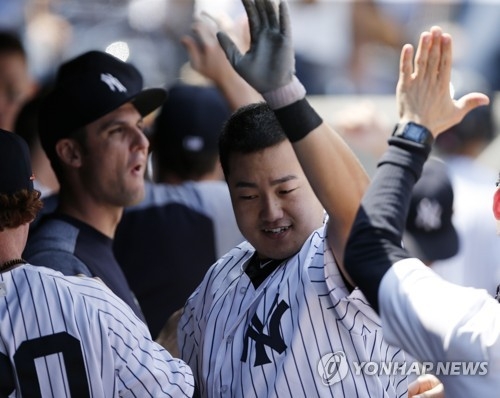