The K League Classic club said it's signed a contract with Gerson, who holds a Spanish passport, on Monday but didn't disclose details of the deal.

Gerson started his pro career with Botabogo in 2010 and then joined the youth side of Dutch giants PSV Eindhoven a year later. He then went on to play for the Atletico Madrid B team in Spain and also had stints in Austria, Hungary and Romania.

The 25-year-old, who can also play defensive midfielder, joined the Polish league in 2014 after signing with Lechia Gdansk. Last season, he was loaned to Gornik Leczna and played 24 matches with the club.

Gangwon, currently third in the 12-team K League Classic, said Gerson has a strong presence in the air and will boost their defense. Gangwon allowed 29 goals in 18 matches, tied for second worst in the first division.

Gerson said he has high expectations of playing in Asia for the first time. He will wear the No. 35 jersey.

Gerson will fill the void left by Cypriot defender Valentinos Sielis, who is out for the season with a knee injury and is expected to be released by the club. 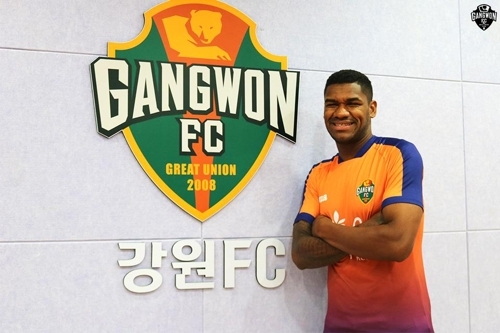