Outbound shipments of dried laver came to a record-high US$268.93 million, becoming the country's most overseas sold marine product in the January-June period, according to the data compiled by the Ministry of Oceans and Fisheries.

It was the first time for dried laver to take first place among all marine products.

Dried seaweed, called "gim" in Korean, is usually roasted with sesame oil and fine salt to be served as a side dish in Korean dining. Snacks made of gim have gained popularity among foreigners in recent years.

By country, South Korea's exports of dried laver to Japan, China and Thailand rose 46 percent, 62 percent and 60.3 percent, respectively, during the same period.

The overall exports of seafood rose 12.1 percent in the first half of this year, reaching $1.12 billion, the data showed. It is the second-highest record after $1.17 billion tallied in 2012. 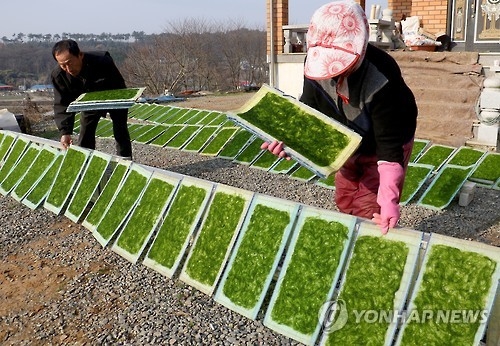 Exports of dried laver up 49.4 pct in first half of this year

Exports of dried laver up 49.4 pct in first half of this year