The department stores' sales index dropped 4.6 percent in May compared to the same period last year, according to the data from Statistics Korea.

Since the beginning of this year, the index has been on a downturn, recording 1.5 percent, 5.6 percent and 3.5 percent drops in January, February and March, respectively, the data showed. The rate of decrease dropped slightly to 2.2 percent in April but surged again the following month.

Experts have said the rise of online purchases is attributable to the sales fall of department stores as South Koreans are increasingly making use of their smart devices.

In May, purchases made through mobile gadgets, such as smartphones, reached an all-time high with 3.82 trillion won (US$3.3 billion), soaring 37.9 percent from a year earlier, according to additional data from the statistics office.

The proportion of sales made from department stores out of all retailers in May, meanwhile, stood at 7.2 percent, down 0.6 percentage point on-year, the data showed. 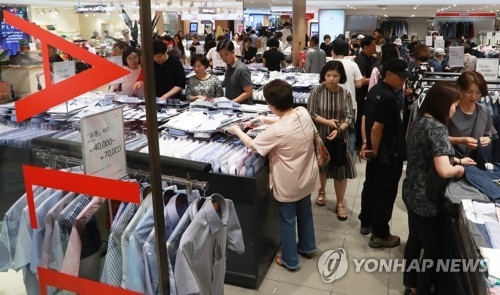