The number of newly registered foreign vehicles rose to 23,755 in June from 23,435 a year earlier, the Korea Automobile Importers and Distributors Association (KAIDA) said in a statement.

Customers are increasingly looking to buy "greener" vehicles, such as gasoline hybrid models, as the government moves to apply stricter rules on diesel-powered vehicles and to sharply reduce the number of fine dust-emitting cars on the street in the next five years. 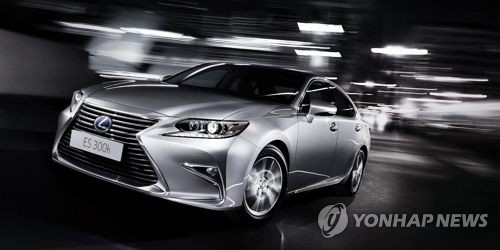 Lexus' ES300h was among the top three best-selling models, along with Mercedes-Benz's E300 4MATIC and E220d 4MATIC sedan, last month, the statement said.

Mercedes-Benz topped other imported brands in June, beating its archrival BMW. Mercedes-Benz sold 7,783 vehicles grabbing a share of 33 percent in South Korea's imported vehicle market last month, up from 19 percent a month earlier. BMW saw its share slightly rise to 23 percent from 21 percent during the same period by selling 5,510 units.

In South Korea where six out of 10 customers still pick German vehicles over other imported cars, the two German carmakers are in a neck-and-neck competition.

As the government moves to reduce the number of diesel cars on the streets by 30 percent in the next five years, imported carmakers are expected to launch more gasoline hybrid and environment-friendly vehicles to woo customers.

The share of imported vehicles in the domestic passenger car market rose to 15.47 percent from 14.64 percent a year earlier, a KAIDA spokeswoman said.