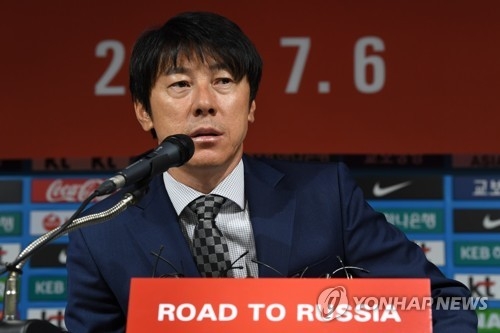 Shin also has to form a new coaching staff to support operations of the team. He hinted at bringing new assistant coaches into the national team. There are currently two assistant coaches left on the senior squad -- Seol Ki-hyeon and Cha Sang-kwang.

"Before we make the one team, we need to make the coaching staff as one unit," he said. "I think it's not right for assistant coaches to just support their boss. They also need to give their opinions to help this team."

Shin is known for his chameleon-like tactics, while entertaining fans with attacking football. While critics pointed out his team had weak defense, Shin vowed that it will be different this time.

"Unlike the Olympic team or the U-20 side, now I can pick the best players in this country (without age restrictions)," he said. "Now we just need to boost the organization of our defensive teamwork. I think we can build up solid defense."

The former Seongnam FC coach said for the next two qualifiers, he may come up with a more conservative style of football than he previously showed.

"For the next two qualifiers, we need to play very carefully and create stable defense," he said. "We first should never concede a goal and collect victory even we just score one goal."

When asked about utilizing South Korea's biggest football star Son Heung-min, Shin said fans will see the Tottenham Hotspur attacker being used differently than he was in the Stielike era.

"People often say Son plays well with Tottenham but not with the national team," he said. "I have a plan, which Stielike didn't use before. Our use of Son and his movement could be different than before." 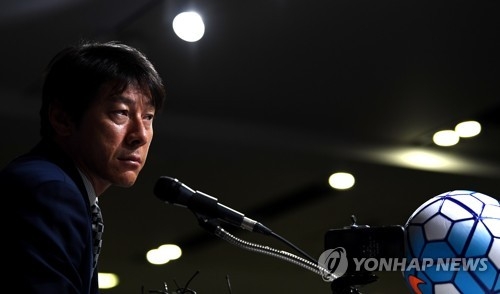 Shin said he is confident of maximizing the players' talent and using their best skills because he already knows most of the national team footballers' characteristics. Before serving as assistant to Stielike, Shin did manage the national team as the caretaker for friendly matches against Venezuela and Uruguay in September 2014.

"I had good communication with the players before, and I know each player's character," he said. "Although I have to think about ways to motivate these players at this moment, but I'm confident of utilizing their talents."

Shin, former attacking midfielder who scored three goals in 23 international matches, also asked for support from fans and the media to help South Korea grab tickets to the World Cup in Russia.

"People say South Korean football is in danger, but I want fans to give their support with hope," he said. "I know I will be denounced by fans if we fail to get results, but until then, I want people to give us energy."