SEOUL, July 6 (Yonhap) -- China's top envoy in Seoul on Thursday voiced hopes for a "reasonable" solution to the dispute over the deployment of a U.S. missile defense system, which he called the biggest problem in bilateral relations between Seoul and Beijing.

During a meeting with Choo Mi-ae, the leader of South Korea's ruling Democratic Party, Qiu Guohong also noted that since President Moon Jae-in took office in May, opportunities have emerged for the two countries to normalize and newly develop their ties.

"The issue of the Terminal High Altitude Area Defense (THAAD) system is the biggest difficulty in the China-South Korea relationship," he said during the talks at the National Assembly. "Through joint efforts, I believe we can find a reasonable solution." 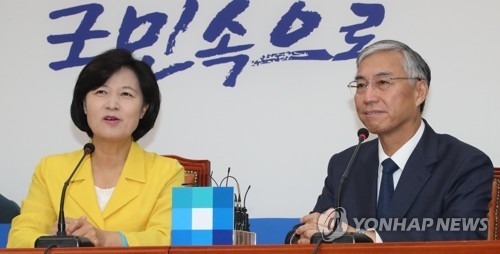 The Seoul-Beijing relationship has fallen to its lowest point in years due to the friction over the installation of a THAAD battery in a southern county. China argues THAAD could undermine its security interests, while Seoul and Washington have stressed its military utility to counter Pyongyang's growing military threats.

Moon has ordered a new environmental impact assessment on the THAAD system as part of efforts to secure "domestic procedural legitimacy." The order temporarily suspended its full deployment.

During their talks, Choo noted that the practicality of the missile shield program has been "politically and diplomatically" exaggerated, and that the countries should "cool-headedly" look at the deployment issue.

"We are well aware that diplomatic efforts to seek China's understanding were insufficient," Choo said. "I hope that from now on, we can settle bilateral issues, big or small, step by step."