SEOUL, July 6 (Yonhap) -- An appeals court on Thursday upheld a lower court's acquittal of four current and former lawmakers of charges of confining an intelligence agent involved in alleged media manipulation operations before the 2012 presidential election.

The Seoul High Court ruled that Rep. Lee Jong-kul and three others from the ruling Democratic Party had no intention of holding the National Intelligence Service (NIS) agent against her will.

They were indicted in 2014 on charges of an unlawful confinement of the agent, identified only by her surname Kim, inside her residence in Seoul for about 35 hours. Kim was alleged to have taken part in an operation to influence public opinion by posting online comments in favor of the then conservative presidential front-runner Park Geun-hye.

Then NIS chief Won Sei-hoon was sentenced by a higher court to three years in prison for ordering the operation in violation of the law that bans the intelligence agency from intervening in politics. The Supreme Court however ordered a retrial of the case in July 2015.

In its ruling Thursday, the upper court agreed with the initial verdict that Kim had considerable ways and means to leave the house at her will even when the lawmakers were there with her.

The defendants have claimed that they went inside her house out of concern that she may destroy evidence linking her to the suspected illicit influencing of public opinion.

The court acknowledged their argument since Kim has in fact gotten rid of the files on her computer and that it is highly probable that she chose to stay inside because she was worried they would gain access to the evidence.

They were acquitted by the Seoul Central District Court in July last year. The prosecution immediately filed an appeal. 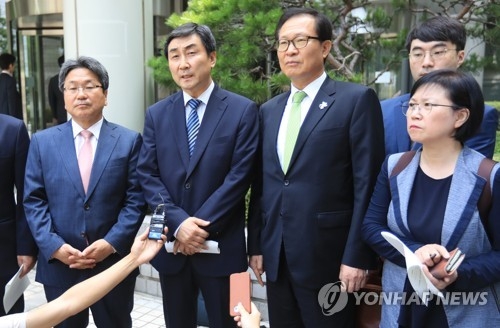