SEOUL, July 6 (Yonhap) -- If there's one thing that makes new South Korea football coach Shin Tae-yong different from his predecessor Uli Stielike, it is his standards on squad selection.

Shin was named new head coach for the men's national football team Tuesday by the Korea Football Association (KFA), with a task of guiding South Korea to the 2018 FIFA World Cup and achieving nine consecutive appearances at football's showpiece event.

In his first meeting with the press Thursday at the KFA House in Seoul, Shin vowed to select players who best fit his style of football, even if those footballers don't play regularly with their pro clubs.

"Stielike previously said he would not pick players who don't perform regularly, but I have a different view," Shin said. "I will pick players who can help this team even if they don't play with their clubs." 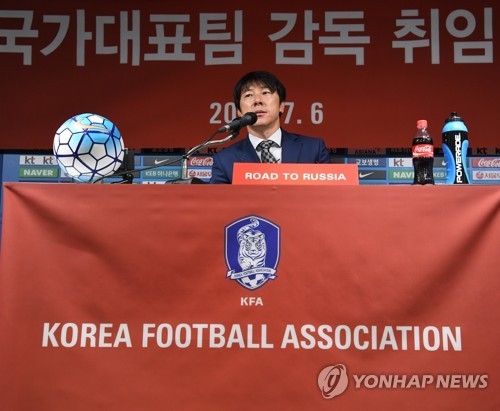 Stielike in his early days at the helm didn't select the players who are merely bench members with their club. The German, however, later broke his dogma by fielding players like Lee Chung-yong of Crystal Palace and Park Joo-ho of Borussia Dortmund -- who were struggling to get playing time with their European clubs -- and criticized by fans.

Shin, who previously served as assistant to Stielike, said the players who show the best form at the moment will get the nod and emphasized that overseas-based players will not have a free pass to the national team.

"I want to pick players who can best portray my style of football, and it doesn't matter where they play," he said. "I can even form my entire squad with domestic league players."

Shin knows he took the job at a critical moment. In the final Asian qualifying round, South Korea are barely holding on to the final automatic qualification spot with only two matches remaining. South Korea are stuck at 13 points with four wins, a draw and three losses, sitting in second place in Group A, but Uzbekistan are only one point behind.

In Asia, the top two teams from Groups A and B will advance directly to the World Cup in Russia. The two third-place teams must go through a playoffs for their final chance to reach the event.

South Korea are scheduled to host already qualified Iran on Aug. 31 and face Uzbekistan in Tashkent on Sept. 5 to close out the qualifying stage for the 2018 World Cup. However, the Taeguk Warriors could play without Son Heung-min of Tottenham Hotspur and Ki Sung-yueng of Swansea City in the upcoming qualifiers as both players are currently injured and need time to recover.

Shin said he will not gamble on using promising players in the remaining qualifiers since the two matches could determine the fate of South Korean football. The coach knows a lot of young players as he previously led South Korea at the Rio de Janeiro Olympic Games and at the FIFA U-20 World Cup.

"We're not in a situation to pick young players (to test)," he said. "If we can secure our World Cup spot, then we can test prospects in friendly matches and prepare for the next step." 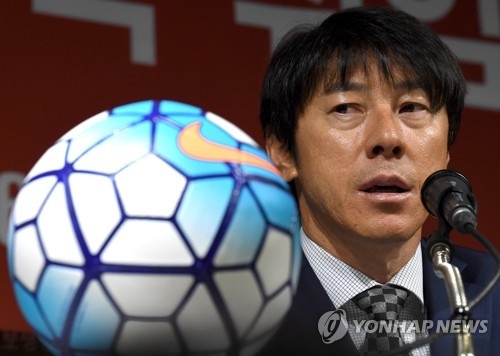