SEOUL, July 6 (Yonhap) -- North Korea said it will commemorate its first test of an intercontinental ballistic missile with fireworks in Pyongyang late on Thursday.

"Fireworks will go off near Juche Tower along the Taedong River in the DPRK's revolutionary capital of Pyongyang on the night of July 6 to celebrate the success of a Hwasong-14 ICBM test-fire, which is a big historical occasion and an epochal incident," said the North's Korea Central Broadcasting Station, monitored here. DPRK refers to the country's official name, the Democratic People's Republic of Korea.

The North held the same event in February when it succeeded in launching a long-range missile, although it had usually held such events on the birthdays of its leaders before the incumbent Kim Jong-un regime.

On Tuesday, the North launched the Hwasong-14 ICBM that it claimed reached an altitude of 2,802 kilometers and flew 933 km for 39 minutes before hitting an intended target in the East Sea. 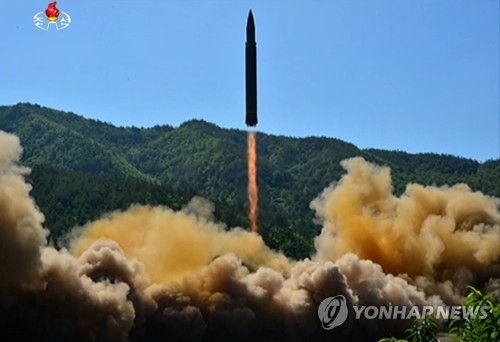