The summit slated for Friday and Saturday comes amid heightened tensions after the communist North test fired what it claimed to be its first intercontinental ballistic missile (ICBM) on Tuesday.

Moon stressed the urgency of the issue in an earlier meeting with German Chancellor Angela Merkel in Berlin, noting the North was developing its missile program at a much greater speed than expected.

The German chancellor expressed her support for Seoul's leadership in ridding North Korea of its nuclear and missile programs, according to Moon's presidential office, Cheong Wa Dae.

This year's host of the G20 leading economies also promised to seek a joint reaction of world leaders, possibly in their joint statement expected at the end of their two-day meeting in Hamburg, it said. 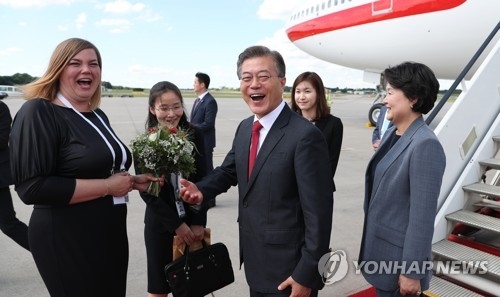 While in Berlin, the South Korean leader also said he was ready to meet with North Korean leader Kim Jong-un at any time and any place to discuss any issue related to establishing peace on the Korean Peninsula.

"When the right conditions are fostered and when there is a chance to reverse the current tension and situation of confrontation on the Korean Peninsula, I am ready to meet with North Korean leader Kim Jong-un at any time and any place," he said while speaking to members of Korber Foundation, a nonprofit think tank.

Moon and Abe will meet again early Friday for a bilateral summit that is expected to cover a wide range of issues, including historical disputes that have often damaged and continue to hamper the countries' bilateral ties, according to Cheong Wa Dae.

The new South Korean president insists Tokyo must acknowledge and offer a sincere apology for its past wrongdoings, but has also said such issues must not keep the countries from continuing or even developing their bilateral cooperation on other issues, including North Korean nuclear and missile threats.

Since Moon came into office on May 10, the North has staged six missile tests. It has conducted five nuclear tests so far with the latest one taking place in September 2016.

The South Korean president was expected to hold bilateral talks with a number of other global leaders on the sidelines of the G20 summit and seek their support for his country's efforts to denuclearize North Korea, according to Cheong Wa Dae officials.

He will head home on Sunday, one day after the G20 summit closes.