SEOUL, July 6 (Yonhap) -- A Seoul court on Thursday ordered the state to pay some 680 million won (US$604,000) in compensation to a former student activist who was found wrongly convicted of aiding and abetting his friend's suicide and forging his will.

In 1992, Kang Ki-hoon, then a university student, was sentenced to three years in prison for ghostwriting the will of Kim Ki-sul, who set himself on fire and jumped to his death from a university building in Seoul in protest against the government led by general-turned-president Roh Tae-woo.

In 2015 the Supreme Court acquitted him of all charges citing a lack of evidence and acknowledged that he was forced to confess. Later that year, he filed a 3.1 billion won damage suit against the state and legal authorities.

However, the court denied the plaintiff's request to have the two prosecutors who investigated Kang's case also make compensation, saying that the statute of limitations has run out. 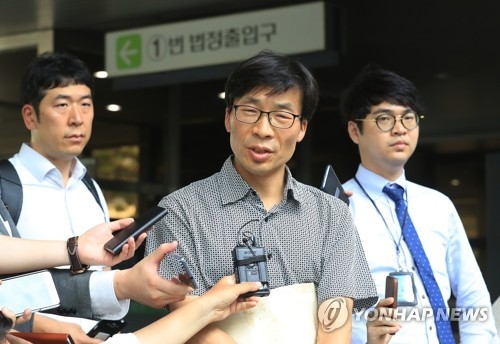