SEOUL, July 6 (Yonhap) -- A national security advisor to President Moon Jae-in said Thursday that the U.S. appears to have come to a conclusion too hastily about North Korea's intercontinental ballistic missile (ICBM) capability, adding that it will take more time for Pyongyang to perfect all the necessary technologies.

Moon Chung-in, a professor at Yonsei University, also said that this means that there is still time for the international community to resolve the North's missile and nuclear stalemate through peaceful means.

"My personal view is that the U.S. State Department and Secretary of State Tillerson both came to a conclusion too easily (about the North's missile capability)," he said at a seminar held in central Seoul.

"They called it an ICBM and said that the North has secured ICBM capability but the U.S. appears to have overestimated its capacity," he added. 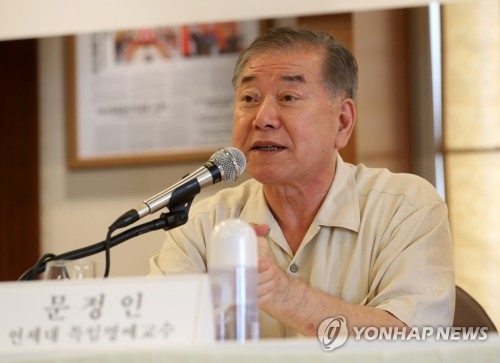 Early on Tuesday, the North fired a ballistic missile toward the East Sea. It was initially seen as an intermediate missile but Pyongyang later said in a televised announcement that it successfully test-fired an ICBM, named Hwasong-14.

U.S. Secretary of State Rex Tillerson confirmed that North Korea's latest missile launch was an ICBM, indicating that Pyongyang has moved much closer to perfecting capabilities to deliver a nuclear warhead on such missiles capable of hitting the continental U.S.

In a U.N. Security Council meeting on Wednesday (local time), U.S. Ambassador Nikki Hailey said that military force could be used against North Korea if necessary and warned that its continued provocations are "quickly closing off" chances of a diplomatic solution.

"There are no data about whether the missile can withstand the heat when making re-entry to the atmosphere, whether it is possible to control its deceleration and if an actual nuclear warhead can be loaded onto its tip," Moon said.

"To secure stability in missiles, they have to be tested about 15 times but there have not been many tests. From a technological point of view, it is hard to say that the North has secured an ICBM capability," he added. "This means we still have time."

Moon said that he recently talked to Theodore Postol, a professor at the Massachusetts Institute of Technology, through emails in which he asked whether the missile that the North tested on Tuesday is a "precursor" or "prototype" from which it can be mass produced. The professor answered that the former was right, meaning that it is in the initial stage of developing an ICBM, he added.

"If an ICBM can be mass produced, it would be hard to seek negotiations but is it still possible to seek talks?" he said. "A majority of experts in Washington say that there is still room for talks... The mainstream opinion is that there is room for talks so let's solve this problem peacefully."

"The recent test of the Hwasong-14 is not the end of the world. I think we can make a breakthrough and we can figure out a shared alternative through global coordination including consultations with such countries as the U.S., China and Russia," he added.

Moon also said that there is no need to draw any "red line" in dealing with the North's provocations, since it could reduce the room to wiggle around.

"If we draw the red line and do not punish (when the North crosses it), it could hurt our credibility. If we act, then it could lead to devastating results," he said. "More desirable in international relations is to pursue a multifaceted approach without drawing any such lines."

Oh Joon, former ambassador to the United Nations who joined the seminar, also underlined the importance of dialogue with the North in resolving the nuclear stalemate, saying that talks and negotiations should be pursued even in a time of war.

"We should make it simple and shouldn't be swayed by each provocation and the focus should be placed on how we will be able to make the North give up its nuclear capabilities. Denuclearization talks are better than a clash," he said.

(LEAD) Moon adviser says it's too early to conclude N.K. has ICBM

(LEAD) Moon adviser says it's too early to conclude N.K. has ICBM