The Kia Tigers beat the SK Wyverns 5-3 in a Korea Baseball Organization (KBO) regular season game at Incheon SK Happy Dream Park in Incheon, but their hot streak had to be stopped.

The Tigers, the leaders in the 10-team KBO League at 53-28, had scored 10 or more runs in their past eight games from June 27 to Wednesday. The Tigers' offense was so hot during that period, they produced 111 runs total.

Against the Wyverns, the Tigers took the first of the three-game series 15-6 on Tuesday. They lost to the Wyverns on Wednesday, but were able to extend the record since the game ended 18-17.

In Wednesday's game, the Tigers had 11 consecutive hits and saw the players scoring 12 runs consecutively in the fifth inning, setting a KBO record for both categories.

The previous KBO record for the longest streak of double-digit runs scored was four games, set by the Lotte Giants and the NC Dinos in 2015.

The major league record for the longest streak is six games set by the New York Giants (now the San Francisco Giants) in June 1929. The Giants' streak included doubleheaders.

In Japan, the 1951 Yomiuri Giants, the 1998 Daiei Hawks and the 2003 Nippon-Ham Fighters had scored 10 or more runs in four consecutive Nippon Professional Baseball games. 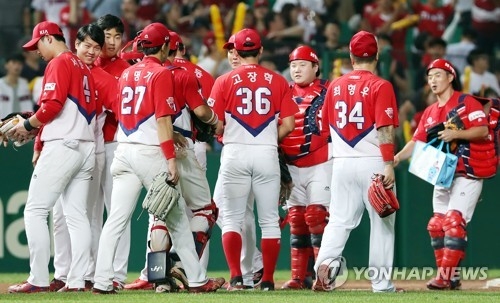