Trump made the remark in Poland after talks with Polish President Andrzej Duda. He didn't specify what those severe things are, but military options could be among them.

Hours earlier, Trump's U.N. envoy, Amb. Nikki Haley, said during a U.N. Security Council meeting that the U.S. is prepared to use its "considerable military force" if necessary, warning that Pyongyang's actions, including the ICBM test, are closing off chances of a diplomatic solution.

"I have some pretty severe things that we're thinking about. That doesn't mean we're going to do them. I don't draw red lines," Trump said. He said the North is "behaving in a very, very dangerous manner and something will have to be done about it."

"Not only must we secure our nations from the threat of terrorism, but we must also confront the threat from North Korea. That's what it is. It's a threat and we will confront it very strongly," Trump said. "President Duda and I call on all nations to confront this global threat and publicly demonstrate to North Korea that there are consequences for their very, very bad behavior."

China and Russia have voiced strong opposition to any consideration of military force. 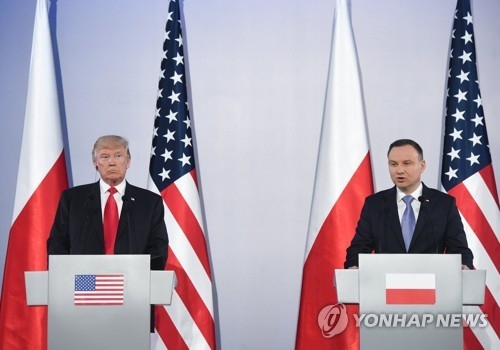