SEOUL, July 7 (Yonhap) -- Leaders of South Korea, Japan and the United States agreed to work together for tougher sanctions by the international community against North Korea for its latest missile provocation that hinted at its ability to target most countries in the world, South Korea's presidential office said Friday.

"The leaders agreed on the importance and need of intensified pressure on North Korea," it said.

It also followed North Korea's test launch of what it claimed to be its first intercontinental ballistic missile (ICBM), which experts say may reach the mainland U.S. if proven to be as effective as claimed.

The three leaders agreed on the need to quickly halt the North's missile program to prevent it from advancing further, noting the communist state appears to have already made significant progress, according to Cheong Wa Dae.

"The leaders of the three countries agreed on the importance of quickly halting the advance in North Korea's nuclear missile capabilities that is moving forward precipitously as seen in its claim that its latest missile involved an ICBM," she said, according to Cheong Wa Dae.

"In that sense, they also agreed on the need to consider various means to place North Korea on the path to denuclearization while tightening the reins of sanctions and pressure against North Korean provocations," the minister was quoted as saying. 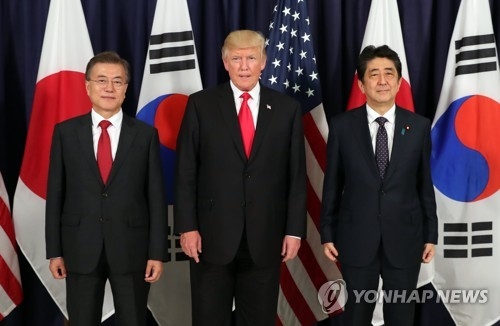 The U.N. Security Council convened an emergency meeting in New York to discuss the North's latest missile launch, but failed to produce a joint reaction amid apparent protests from China and Russia, both considered communist allies of North Korea, against pushing Pyongyang too far.

The three leaders from the U.S. and its two allies again stressed the importance of a bigger role by China to rein in North Korea's evolving nuclear and missile capabilities.

"In addition, the leaders of the three countries agreed to closely communicate with the Chinese and Russian sides through bilateral and multilateral forums to be held at the upcoming G20, including the Korea-China summit held today, while acknowledging the importance of China's active role for progress on the North Korean nuclear issue," the South Korean foreign minister said.

In a bilateral summit in Berlin earlier Thursday (German time), Moon and his Chinese counterpart, Xi Jinping, noted tougher measures were needed against North Korea but only to bring it back to the dialogue table so the world can resolve the North Korean nuclear issue peacefully.

Trump said the U.S. was considering "pretty severe things" for the North, according to earlier reports.

His remarks also came after the U.S. ambassador to the U.N., Nikki Haley, said her country was ready to use military force against North Korea if necessary, though it preferred not to go in that direction.

Meeting with the U.S. and Japanese leaders, the South Korean president explained his policy of a phased denuclearization of the North, which calls for a resumption of dialogue with the reclusive state after the latter takes initial steps to denuclearize.

He has also proposed to meet with North Korean leader Kim Jong-un, partly to discuss such a process, at any time and any place under the right conditions.

The possible use of force against the North did not come up at the three-way meeting over dinner hosted by Trump, Cheong Wa Dae said.