SEOUL, July 7 (Yonhap) -- More than 30 defects were found in the North Korean ferry Mangyongbong, which recently started a regular service on the route between its eastern port of Rajin and Russia's Vladivostok, during the Russian port authorities' safety inspection, a U.S. broadcaster reported Friday.

According to records from the Asia-Pacific Port State Control (PSC) Committee, a total of 34 problems were found in an inspection at the Russian port on May 25, when the ship entered the port for the first time for the service, Voice of America said.

The defects, including seven in fire prevention facilities and three in life rescue equipment, were related mostly to the safety of the vessel and passengers, the broadcaster said.

Later, the Russian authorities also reported to the committee that they discovered that none of the defects had been corrected in another safety inspection on June 1, when the ship departed the port, according to the broadcaster.

Most North Korean ships are believed to have failed to pass PSC safety checks as they are outdated, it added.

Earlier, Russian news media reported the Mangyongbong began its once-a-week service on the route on May 17. 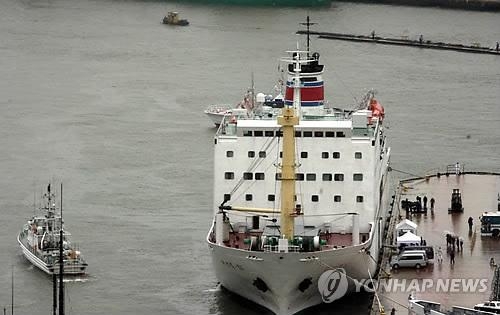 Commissioned in 1971, the 102-meter-long, 14-meter-wide North Korean boat originally sailed between the North's Wonsan and Japan's Niigata mainly to transport pro-Pyongyang Koreans residing in Japan who wanted to live permanently in the communist country. The vessel has been drastically remodeled to be used as a tour boat after Japan banned the ship's entry into its port in 2006 due to sanctions for Pyongyang's first nuclear and missile tests that year.
(END)