SEOUL, July 7 (Yonhap) -- A teaser video for the Korean language-dubbed Japanese animation "Your Name." has been unveiled.

The video released July 5 features voice works by South Korean actors Ji Chang-wook and Kim So-hyun taking on the roles of a city-dwelling male high school student Taki and a female student Mitsuha who lives in the quite countryside, respectively.

Depicting the story of the two teenagers who mysteriously switch bodies, the film has earned US$207 million from 18.2 million admissions in Japan. Factoring in international grosses, it has earned more than $290 million globally, topping the box offices of China, Hong Kong, Thailand and Taiwan.

The animation written and directed by Makoto Shinkai became the most-viewed Japanese film of all time in South Korea, having sold over 3.5 million tickets nationwide.

The Korean language version "Your Name." will open in theaters July 13. 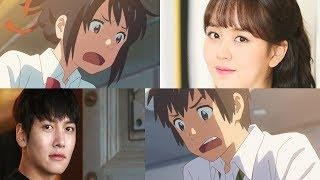 Teaser for Korean version of 'Your Name.' released

Teaser for Korean version of 'Your Name.' released