Gangwon Provincial Government said Son will help its efforts to raise awareness of the region and promote the 2018 PyeongChang Winter Games after appointing the footballer as its honorary ambassador. Son, who turns 25 on Saturday, is a native of Chuncheon, Gangwon Province, some 80 kilometers east of Seoul.

The 2018 Winter Olympic Games are scheduled for Feb. 9-25 in PyeongChang, some 180 kilometers east of Seoul in Gangwon Province, and the adjacent sub-host cities of Gangneung and Jeongseon.

Son is currently working to recover from a right forearm injury that he suffered in the 2018 FIFA World Cup Asian qualifier against Qatar last month.

Son enjoyed his most successful English Premier League (EPL) season since he signed with the Spurs in 2015. In the EPL, he bagged 14 goals, 13th best in the league, in addition to six assists.

Overall, he netted 21 goals in all competitions during the 2016-2017 season, breaking the single-season scoring record for a South Korean in Europe, previously held by Cha Bum-kun, who had 19 goals for the German outfit Bayer Leverkusen in the 1985-1986 season.

Son was also named the Premier League's Player of the Month twice, and the Spurs finished second in the 20-team league while leading the competition with 86 goals. 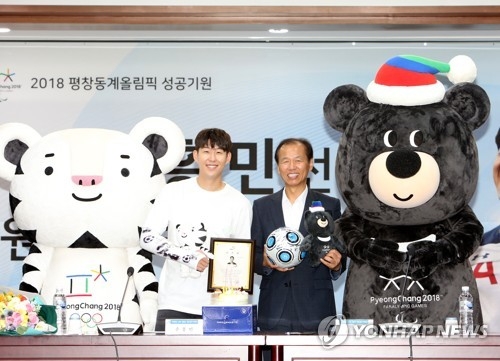