The head of the DPRK delegation made the criticism in an address at the 40th FAO conference in Rome on Tuesday, the Korean Central News Agency said in an English-language dispatch.

Stressing that a peaceful environment is a prerequisite to realizing the U.N.'s sustainable development goals, the official said that some specific countries, however, attempt to use their power to check the independent aspirations of developing countries, the agency said.

Their high-handed policy poses a serious threat to not only national sovereignty but also economic development, the official said.

"A typical example is the act of those forces hostile to the DPRK imposing unprecedentedly inhumane sanctions on the DPRK in order to bring down the socialist system and even strangle people's livelihood," the official said. DPRK is short for the country's official name, the Democratic People's Republic of Korea.

The communist country has long been under economic sanctions by the international community on its continued nuclear and missile tests. 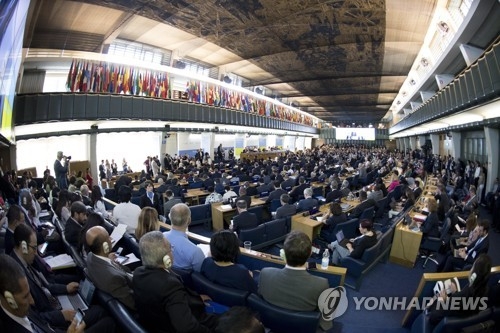