(ATTN: UPDATES with analyst's comments and no immediate reaction from China)
By Kim Kwang-tae

China -- Seoul's largest trading partner -- has imposed restrictions on South Korean imports and banned the sale of group tour packages to the Asian neighbor. Such actions are widely seen as apparent economic retaliations over the deployment of an advanced U.S. missile defense system in South Korea.

But China has repeatedly pressed South Korea to withdraw the THAAD missiles out of concern that the deployment could hurt Beijing's security interests.

The two leaders are in Germany for the Group of 20 summit, the world's premier forum that handles economic, diplomatic and other hot-button issues.

Still, Xi told Moon that South Korea should seriously consider China's legitimate concern and handle the relevant issue in a way that makes sense to remove obstacles for the improvement and development of the bilateral relations.

Xi stopped short of naming the U.S. missile system, but he made clear his opposition to the missile shield again in unequivocal terms and suggested there will be no easing of economic retaliations.

China calculates that the chance for South Korea to withdraw the U.S. missile system is 50:50, and is using a combination of persuasion and threat, said Lee Seong-hyon, a research fellow at the Sejong Institute, a private security think tank near Seoul. "Therefore, it is willing to engage in dialogue with Seoul over THAAD, but its basic position hasn't changed," Lee said.

Xi's comments have drawn criticism among South Korean businessmen over what they see as his contradictory rhetoric. 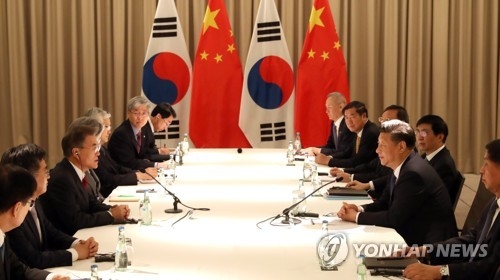 In January, Xi championed free trade as he warned against protectionist measures in a speech at the World Economic Forum in Davos, Switzerland, but China has shown no interest in lifting retaliatory measures against South Korea that is hindering trade.

"In a word, President Xi's behavior is two-faced," a senior executive at a major South Korean conglomerate said. "How can China assume the leadership role when it behaves shamelessly at a time when it is vowing to lead the global economy as a G2 power."

The businessmen asked not to be identified, citing possible damage to the company he works for.

Lee said many business people think China's economic retaliations over a political matter goes against the very tenet of what Xi preached openly in front of an international audience.

"As China tries to burnish its international image, such a behavior raises questions about China's behavior and the nature of its emerging leadership in the world," Lee said.

Sales of vehicles made by Hyundai Motor Co., South Korea's largest carmaker, increased 6.4 percent and 12.9 percent in China in the first two months of this year from a year earlier.

However, Hyundai saw its sales in the world's largest auto market nose dive by 59.1 percent between March and June from a year earlier, a development that analysts said cannot be explained but as fallout of the diplomatic row between South Korea and China over the U.S. missile system.

China has a track record of staging overt boycotts on products from countries that it is at odds with. Such actions are effective because Beijing exercises considerable sway over the market.

In 2012, Japanese carmakers and other firms were hit hard by a Chinese boycott following Tokyo's purchase of three of the disputed islands in the East China Sea -- known as Senkaku in Japan and Diaoyu in China -- from private Japanese owners. It sparked weeks of anti-Japanese protests nationwide in China.

An official of a South Korean business lobby also called into question China's commitment to free trade, noting Xi has pointed out the importance of free trade in summit talks with other leaders, but has become politically motivated and slapped punishments on South Korean firms.

"It does not make any sense," the official said. He complained that such action undermines confidence in China as a credible economic partner.

Lotte Mart -- a discount store outlet of South Korea's retail giant Lotte Group -- said 87 out of 99 outlets have been shuttered following the dispute over the U.S. missile system.

Of 87, 74 outlets were forced by China to suspend operations while Lotte Mart voluntarily stopped operation in 13 outlets, according to the retail conglomerate.

Lotte Group has come under intense fire in China after its unit has handed over its golf course in South Korea's southeastern rural county of Seongju for the installment of the U.S. missile system.

Lotte Duty Free has also suffered disruptions to its website in a distributed denial-of-service attack that Lotte said was traced to a Chinese Internet Protocol address -- the online equivalent of a street address or phone number.

South Korean businessmen expressed concerns that the Chinese government may be directly or indirectly involved in flexing its economic muscle while claiming in public that it is not engaged in retaliations.

Entrepreneurs said China is harassing South Korean exports or marketing in China by making full use of various non-tariff barriers.

In March, South Korea appealed to the service council of the World Trade Organization to determine if the Chinese measures are in conflict with WTO regulations.

"China should deeply contemplate the justifiable criticism that it is the only major country in the world that retaliates economically against a country over political developments," said a manager of a trading company, who wanted to remain anonymous.

In Beijing, an unidentified official at the spokesman's office of the Chinese foreign ministry hung up the phone on a Yonhap news reporter seeking comment Friday.