As the host news agency for the upcoming Winter Games in South Korea, Yonhap News is developing the online platform that allows news outlets around the world to share content on the sports event in real time and for free. The system will be completed within this year.

"Already 48 news agencies around the world have joined the PNN service. I hope your Andes could join the platform too," the Yonhap CEO told the ambassador during their one-hour meeting.

"We checked (with them) and they are totally open to move forward in that way...," the ambassador said, indicating that procedures to sign an agreement between the two news agencies would start immediately.

The partnership would also be "a good opportunity for Ecuadorian people to introduce their culture to Koreans," Park also said, referring to the growing popularity of Korean pop music and dramas in the South American country.

"We are very keen to move forward immediately to achieve this closest process," according to the ambassador. 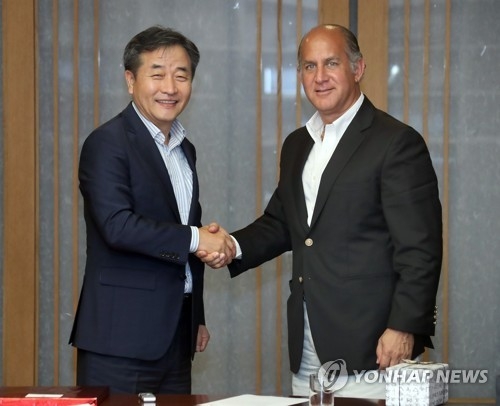