SEOUL, July 7 (Yonhap) -- North Korea hinted Friday that it would continue to stage provocations against the United States, as Washington warns of punitive action for its recent test of an intercontinental ballistic missile (ICBM).

The North's foreign ministry called Tuesday's ICBM test as a "gift package" for the U.S., repeating its long-standing assertion that its nuclear development is designed to defend itself against Washington's hostile policy and nuclear war threat.

"The U.S. will receive more 'gift packages' of different sizes from the DPRK in endless succession, as it tries harder to destroy, by means of sanctions and pressure, the overall national power and strategic position of the DPRK," the unnamed ministry spokesman said in a statement released by the North's official Korean Central News Agency.

The ministry also hinted that Pyongyang won't discuss its denuclearization issue with Seoul after South Korean President Moon Jae-in in Berlin offered talks on a broad range of issues including its nuclear weapons and a peace treaty.

"The issue of the DPRK's nukes and ballistic rocket is an issue confined to the DPRK and the U.S," it said.

On Tuesday, the North claimed it had successfully test-fired an ICBM, which it said could strike anywhere in the world, including the continental U.S. Both Seoul and Washington confirmed it as an ICBM.

In the statement, the North's ministry also said that it would not bargain away its nuclear and missile programs unless the U.S. renounces what it perceives as a hostile stance against it.

"The DPRK will neither put its nukes and ballistic missiles on the negotiating table in any case nor flinch even an inch from the road of bolstering its nuclear force unless the hostile policy and nuclear threat of the U.S. against the DPRK are thoroughly eradicated," it said.

Touting the latest missile launch as the "final gate to completing the state nuclear force," the ministry also claimed that no other ICBM states had been more "transparent" than the North in the ICBM development. 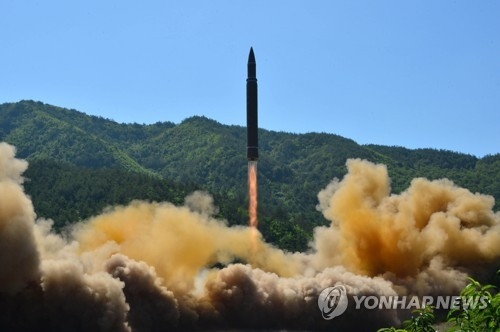