"After Poland had a great meeting with Chancellor Merkel and then with PM Shinzo Abe of Japan & President Moon of South Korea," Trump said in a Twitter posting. "I look forward to all meetings today with world leaders, including my meeting with Vladimir Putin. Much to discuss."

Moon, Trump and Abe held the meeting on the sidelines of a G20 summit in Hamburg of Germany, just days after the North successfully carried out its first test of an intercontinental ballistic missile capable of striking the U.S.

After the talks, the three leaders issued a joint statement condemning the North's launch, reaffirming their commitment to put maximum pressure on Pyongyang and work together to adopt a new U.N. Security Council sanctions resolution at an early date.

They also pledged never to accept a nuclear North Korea, and called on the international community to swiftly and fully implement all Security Council resolutions and to take measures to reduce economic relations with the North. 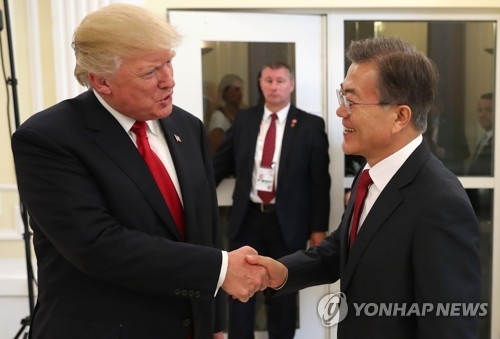