The agreement came in their bilateral summit, held on the sidelines of the Group of 20 summit in Hamburg, Germany on Friday.

"While explaining our government's policy to push for North Korea's denuclearization through all available active and fundamental means, including sanctions and dialogue, President Moon asked for Russia's active role in bringing North Korea back to the negotiating table over its denuclearization," the presidential office, Cheong Wa Dae, said in a press release.

Putin reaffirmed Russia's "firm decision" never to allow North Korean nukes, and expressed his support for Seoul's efforts to bring North Korea back to the table, it added. 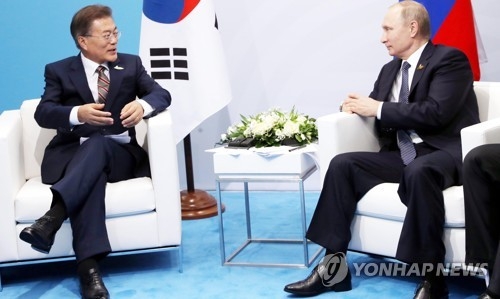 The two leaders also reached agreement on the need to enhance their countries' economic and trade cooperation, especially in the energy sector.

To this end, the Russian leader invited his South Korean counterpart to the upcoming Eastern Economic Forum to be held in Vladivostok in September that is widely expected to focus on the development of the Russian Far East.

Moon gladly accepted the invitation, according to Cheong Wa Dae.

"While noting a need to further intensify their cooperation in the development of the Russian Far East, joint development of a new Arctic shipping line and the expansion of future growth engines in areas including energy, gas and post-nuclear energy sectors, the two leaders agreed to work together for the signing of a free trade agreement between South Korea and the Eurasian Economic Union," the press release said.