WASHINGTON, July 7 (Yonhap) -- U.S. Secretary of State Rex Tillerson said Friday that freezing North Korea's nuclear program is unacceptable because Pyongyang's capabilities have already progressed too much and must be rolled back.

Tillerson made the remark during a briefing on the talks between President Donald Trump and Russian President Vladimir Putin, reiterating his rejection of a proposal from China and Russia that the U.S. suspend joint military exercises with South Korea if the North suspends missile testing.

"President Putin, I think, has expressed a view not unlike that of China, that they would support a freeze for freeze," Tillerson said. "The problem with freezing now, if we freeze where they are today, we freeze their activities with a very high level of capability. And we do not think it also sets the right tone for where these talks should begin."

The U.S. wants the North to be prepared to come to the negotiating table with a focus on how to "cease and roll back" the nuclear program, Tillerson said.

"We're not interested in talking about, 'How do we have you stop where you are today?' because stopping where they are today is not acceptable to us," he said.

During Friday's talks, Tillerson said that Trump and Putin had "a pretty good exchange on North Korea," though Russia sees the situation "a little differently than we do."

"So we're going to continue those discussions and ask them to do more. Russia does have economic activity with North Korea," he said. "We will continue to work with them to see if we cannot persuade them as to the urgency that we see."

Tillerson also said that Chinese efforts to pressure Pyongyang have been "uneven."

"China has taken significant action, and then I think, for a lot of different reasons, they've paused and -- and didn't take additional action. They then have taken some steps, and then they've paused," he said.

Tillerson said that the recent U.S. sanctions on a Chinese bank "certainly got" the attention of China "in terms of their understanding our resolve to bring more pressure to bear on North Korea by directly going after entities doing business with North Korea, regardless of where they may be located."

"We've continued to make that clear to China, that we would prefer they take the actions themselves. And we're still calling upon them to do that. So I would say we -- our engagement is unchanged with China, and our expectations are unchanged," he said.

Tillerson said that the issue of the THAAD missile defense system did not come up during Trump's talks with Putin. 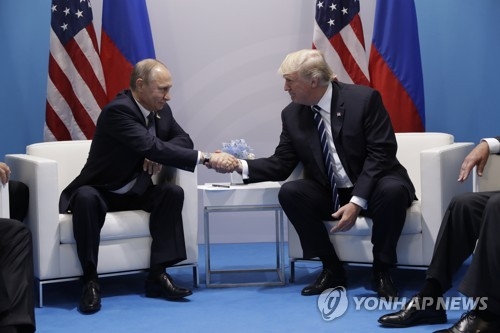