Kim Jong-un was at the Kumsusan Memorial Hall, where the body of Kim Il-sung, his grandfather, is enshrined, to pay respects and mark the anniversary of his passing in 1994, according to the Korean Central News Agency (KCNA).

He was also accompanied by key party and military officials who contributed to the successful launch of the Hwasong-14, an intercontinental ballistic missile (ICBM) which Pyongyang fired off on Tuesday in its latest provocation in defiance of international sanctions.

The test-firing of its first ICBM has sparked fresh tensions over the Korean Peninsula and the allies of South Korea as the North's missile capabilities are seen as growing at a faster pace than expected.

Pyongyang said that its nuclear and missiles will not be up for negotiations unless Washington give up what it calls a hostile policy toward the North.

After he paid homage to the founder, he offered flowers at the standing statues of his grandfather and his father, Kim Jong-il, who died in 2011, the state media said.

Kim, reported to be in his early 30s, came to power in 2012 and has since paid a visit to the memorial hall every year on key anniversaries of the founder. 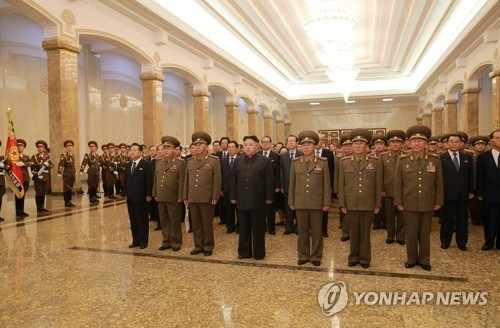