The B-1B Lancers based in Guam practiced "attack capabilities," accompanied by South Korea's F-15K and the U.S. Air Force's F-16 fighter jets, for several hours in the joint show of force, according to the allies.

In a rare move, they made public a photo and footage of the bombers dropping inert GBU-56 laser guided bombs onto a mock target at the Pilsung range in Gangwon Province. 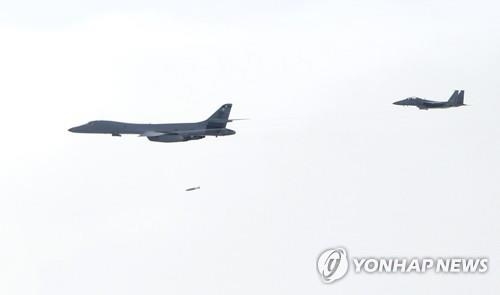 The Lancers' sortie came as part of the continuing demonstration of the ironclad U.S. commitment to our allies against the growing threat from North Korea's ballistic missile and nuclear programs, the U.S. Air Force said.

It cited a series of "increasingly escalatory" actions by the North, including the launch of an intercontinental ballistic missile (ICBM) on Tuesday.

"North Korea's actions are a threat to our allies, partners and homeland," said Gen. Terrence O'Shaughnessy, Pacific Air Forces commander, said in a statement. "Let me be clear, if called upon we are trained, equipped and ready to unleash the full lethal capability of our allied air forces."

He stressed, "This mission clearly demonstrates the U.S.-ROK alliance remains prepared to use the full range of capabilities to defend and to preserve the security of the Korean Peninsula and region."

On Wednesday, South Korea test-launched a Hyunmoo-2A ballistic missile into the East Sea in combined missile training with the USFK aimed at demonstrating the alliance's capability to counter the North's threats.