"President Moon held a bilateral summit with Australian Prime Minister Turnbull on July 8 and agreed on the need to strengthen the global partnership between the two countries that share the basic values of democracy and market economy," the office, Cheong Wa Dae, said.

The Moon-Turnbull meeting was held on the sidelines of the Group of 20 summit in Hamburg, Germany. 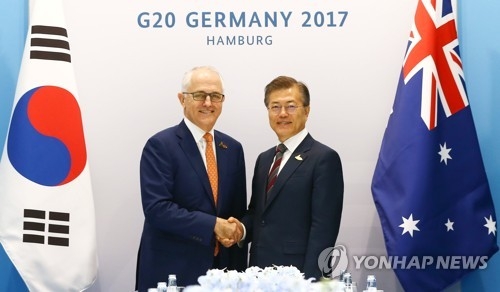 They also exchanged their views on "ways to practically increase the countries' cooperation, as well as ways to cooperate in peacefully resolving the North Korean nuclear issue and establishing peace on the Korean Peninsula," Cheong Wa Dae spokesman Park Soo-hyun said in a press release.

Moon explained Seoul's efforts to bring North Korea back to the dialogue table, using sanctions and pressure if necessary, to peacefully end the North's nuclear ambitions.

The Australian prime minister expressed support for Seoul's leadership in global efforts to denuclearize the communist North and said his country will always be there to support, according to the Cheong Wa Dae spokesman.

The two leaders also underscored the need for their countries to actively work together to promote free trade and fight against the recent spread of protectionism.

They noted the countries' bilateral free trade agreement, implemented in late 2014, has helped boost their trade and economic relations as anticipated, and expressed hope they will continue to expand their bilateral trade and cooperation, especially in the energy sector.

Introducing his new administration's policy to increase the use of liquefied natural gas (LNG) as part of its move toward a nuclear-free nation, the South Korean president said Australia may play a greater role in his country's energy market.

Turnbull expressed hope more South Korean firms will take part not only in his country's energy development projects but also in major infrastructure projects, which he said will benefit both countries, according to Cheong Wa Dae.