"President Moon Jae-in and Indian Prime Minister Narendra Modi held summit talks on July 8, and held in-depth discussions on a wide range of global issues, including North Korea and the North Korean nuclear issue," it said in a press release.

The two leaders met on the sidelines of the Group of 20 summit in Hamburg, Germany. 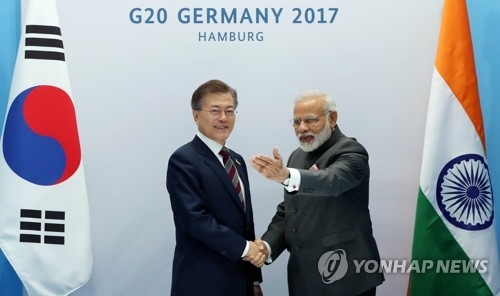 Noting the countries' ties continued to develop in all areas, including foreign affairs, security and trade, they stressed a need to further develop their strategic partnership, established in May 2015, to create a joint community to seek their joint development and prosperity, Cheong Wa Dae spokesman Park Soo-hyun said.

"Also, the two leaders expressed agreement that the countries' bilateral relationship can be further developed to be more mutually beneficial based on their complementary economic structures," the spokesman said.

President Moon also continued to rally support for his country's efforts to peacefully resolve the North Korean nuclear issue, according to Park.

The Indian prime minister expressed his support for Seoul's move to establish peace in its region and said his government will continue to take part in international efforts to help Seoul reach its goal.

Modi also invited Moon to visit his country in the near future. Moon agreed to arrange his visit through diplomatic channels, according to Park.