SEOUL, July 9 (Yonhap) -- Cybersecurity agencies are urged to work together to better counter growing cyberattacks, the chief of the country's state-run cybersecurity body said, stressing it should be given more power to sternly deal with security concerns.

In a meeting with reporters Friday, Baik Kee-seung, president of the Korea Internet & Security Agency (KISA), said security-related firms and agencies should work together to prevent cyberattacks from damaging the private sector.

"Cyberattacks are using the weakness of software, and spreading randomly and massively, which is different from in the past when they targeted specific PCs," Baik said. "It's time for us to consider beefing up information sharing among security agencies."

KISA, established in 2009, mainly deals with the private sector's cybersecurity, while the government runs a separate system to safeguard the public sector and the military.

Baik said the KISA should be given authority to cut off Internet networks or freeze them in order to minimize cyberattack-related damage.

In May, South Korea formed a policy consultative body, made up of government officials and researchers from major tech firms, to actively deal with the global WannaCry ransomware attacks that have affected the country, along with the rest of the world.

Ransomware refers to malware that locks up files on a computer with encryption until the victims pay a certain amount of money to hackers.

KISA said that 17 companies have been struck by WannaCry here. 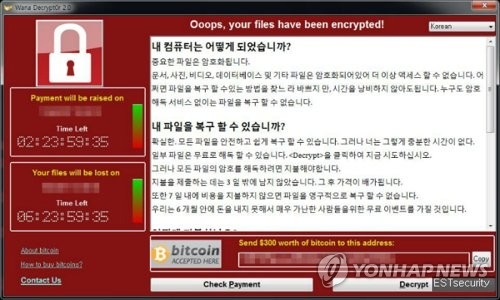 Security agencies urged to team up to better counter cyberattacks

Security agencies urged to team up to better counter cyberattacks