During the talks Saturday, Trudeau expressed deep concern about North Korea and said that Canada is ready to provide any help it can to reduce tensions on the Korean Peninsula, according to Seoul's presidential office Cheong Wa Dae.

In response, Moon called the situation "the worst crisis" since the Korean War, and said that if the missile North Korea fired earlier this week was indeed an intercontinental ballistic missile, it can not only reach the United States but Canada as well.

Moon said that a crisis can turn out to be an opportunity and stressed the importance of efforts to resolve the situation peacefully while at the same time ramping up sanctions and pressure to get the North to completely denuclearize and establish a peace regime on the peninsula.

Trudeau said in response Canada will join other nations in imposing various sanctions on the North.

He also expressed concern about Lim Hyeon-soo, a Korean-Canadian pastor detained in the North, saying Lim's health appears to be worsening. Trudeau also said his concerns have deepened after the death of American college student Otto Warmbier just days after his comatose release from the North.

Moon said that Canada, the U.S. and South Korea should work closely together for the release of those detained in the North. Moon also noted that Trudeau's late father, former Prime Minister Pierre Trudeau, did a lot of work for the world when he was in office.

Trudeau said his father was involved in global issues and played positive roles. He also asked for South Korea's support for Canada's bid to become a non-permanent member of the U.N. Security Council.

On economic issues, Trudeau said he hopes that companies of the two countries will make the best use of their free trade agreement. Moon said that Canadian lobster is popular in South Korea and South Korean exports of cosmetics to Canada have been growing at a quick pace. 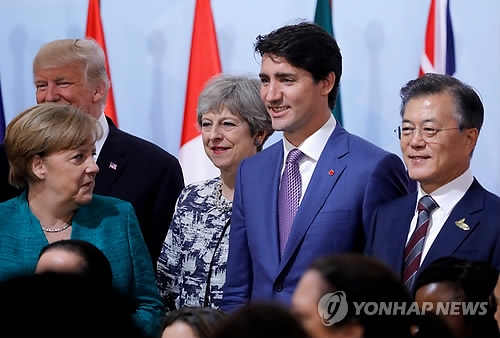 S. Korea, Canada agree to work together to reduce tensions on Korean Peninsula

S. Korea, Canada agree to work together to reduce tensions on Korean Peninsula