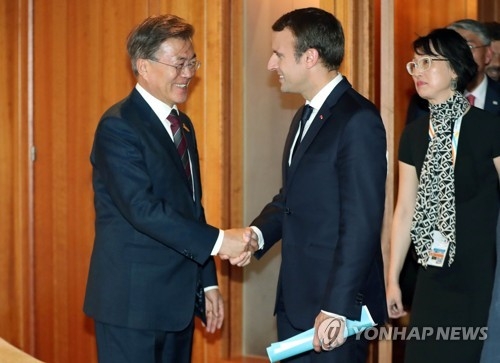 Moon opened the first bilateral meeting with Macron, held on the sidelines of the Group of 20 summit in Hamburg, and said he was pleased to meet with the French president, touting Macron's election was a political revolution that surprised the world.

Moon said he was also elected president thanks to what he called a "candlelight revolution," referring to a wave of candlelight rallies that led to the ouster of former South Korean President Park Geun-hye for corruption.

Macron offered congratulations on Moon's election and said he is aware of how much importance Moon attaches to the issue of South Korea's national security.

The two leaders noted that they began their five-year terms at almost the same time and agreed to work closely together during their terms.

The two sides also agreed to further strengthen comprehensive partnership relations, including regularizing meetings between their foreign ministers, as well as between their defense ministers, and seeking to create a minister-level dialogue in the business, education and science areas.

Moon expressed gratitude for France playing active roles in the North Korean nuclear issue. The two leaders agreed to cooperate closely as they seek fundamental denuclearization of the North by utilizing all means, such as sanctions and dialogue.
(END)