According to sales figures released by the Korea Automobile Importers and Distributors Association (KAIDA) and other market trackers, Mercedes-Benz midsize E-Class executive sedans reigned supreme in the country despite the release of the all-new BMW 5-series cars in February.

"BMW's goal of taking back the No. 1 best-selling car brand title in the country this year has been thwarted up till now," an industry insider said.

In the first half of this year, sales of the Mercedes-Benz E-Class cars reached 18,453 units, while corresponding numbers for the BMW 5-series trailed at just 7,384. 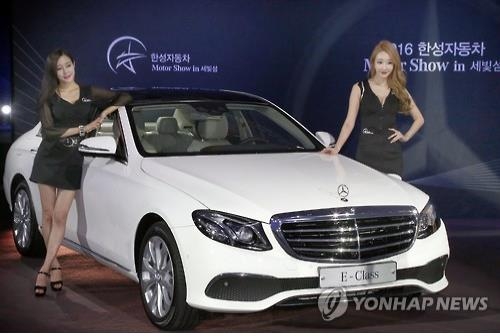 The E-Class and 5-series are important because they traditionally have been the most popular models sold by the two luxury brands in Asia's fourth-largest economy.

In addition, market watchers said over 40 percent of all BMWs sold in the country this year were cars smaller than the 5-series, while 80 percent of Mercedes-Benz vehicles were either the E-or premium S-Class vehicles.

This translates into greater earnings margins for Mercedes-Benz, which is good news going forward.

"BMW had been conducting some aggressive promotions in recent months to attract more customers, but they have not been able to bridge the gap that may be a source of concern for the company," said one industry insider, who wished to remain anonymous.

He claimed one reason for the weak sales is that South Koreans may not think that BMW cars are offering anything new, despite the release of new models.