SEOUL, July 10 (Yonhap) -- President Moon Jae-in returned home Monday after a five-day trip to Germany that largely sought to win international support for his efforts to bring North Korea back to the dialogue table and rid the communist state of its nuclear ambitions.

The main purpose of his trip to the European nation was to take part in the Group of 20 summit held Friday and Saturday, but his main objective clearly was to rally international support for fresh sanctions against the North for its latest missile provocation.

Pyongyang test launched what it claims to be its first intercontinental ballistic missile Tuesday, just one day before the new South Korean president embarked on his first overseas trip for a multilateral gathering.

The latest missile launch marked the sixth of its kind since Moon took office May 10.

Moon's trip began with a two-day visit in Berlin where he met with German leaders, including President Frank-Walter Steinmeier.

Later in a summit with German Chancellor Angela Merkel, Moon stressed a need to increase sanctions and pressure on North Korea following its latest missile test.

Under U.N. Security Council resolutions, the communist state is prohibited from developing its nuclear weapons or means to deliver them.

Moon and Merkel spoke in agreement, calling for fresh and tougher sanctions against the North but saying they must be used only as a means to bring Pyongyang back to the denuclearization negotiations. 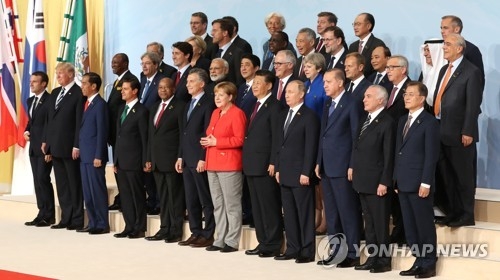 The South Korean leader held bilateral summit talks with eight other heads of state during his five-day trip to Berlin and Hamburg, in all of which he called for joint efforts to bring North Korea back to the dialogue table.

All nine foreign leaders who held a bilateral meeting with Moon expressed their support for Seoul's leadership in regional and international efforts to denuclearize the North, according to Moon's aides.

"President Moon sought to win the countries' support in bilateral summits with leaders, including German Chancellor Merkel, Japanese Prime Minister Shinzo Abe and Chinese President Xi Jinping, while stressing the need to put strong sanctions and pressure on North Korea for its missile launch but hold dialogue with the North at the same time for a peaceful resolution of the issue," Deputy Prime Minister Kim Dong-yeon said earlier, according to Moon's presidential office Cheong Wa Dae.

"Such efforts continued throughout the G-20 summit, prompting other leaders to speak in support of our position," he added.

The South Korean president also sought to promote free trade at the gathering of leaders from the world's 20 largest and fastest growing economies as his country greatly depends on trade for growth.

"At the G-20 summit, the government consistently emphasized the fact that free trade is essential to global economic growth and that a spread of protectionism might well lead to the loss of the momentum for global recovery," Kim said.

"And by actively sharing and promoting such a stance with other concerned nations, we greatly contributed to having the G-20 reaffirm its support for global trade based on international norms and its rejection of protectionism."