According to Bloomberg, Lee, who has been hospitalized since May 2014 after he suffered a heart attack, is valued to be worth US$18.5 billion. The total represents an increase of $4.4 billion this year alone, the information source said.

His ranking stood at 68th place among billionaires in March as calculated by Forbes.

The spike comes as the stock price of Samsung Electronics Co., the world's leading maker of smartphones and memory chips, has surged 32.8 percent throughout 2017, thanks to the strong performance of semiconductors.

Samsung Electronics traded at 2.39 million won (US$2,070) per share Friday, as the company released a record high quarterly earnings guidance. The aggregate worth of the company on the stock market hit 312.68 trillion won.

Broken down, Lee owns $12.6 billion worth of shares in Samsung Electronics, along with sizable holdings in Samsung Life Insurance and Samsung C&T Corp.

He also controls some $770 million in personal assets and other possessions.

Besides the chairman, his only son and heir-apparent Jae-yong ranked 199th place on the Bloomberg ratings, up from 239 in the previous Forbes tally.

The younger Lee, who is undergoing a trial on corruption charges involving former President Park Geun-hye, is estimated to be worth $7.2 billion, up $1.5 billion from early this year. Jae-yong is the vice chairman of Samsung Electronics and has been effectively running the company since his father took ill.

The father and son duo are ranked the first and second wealthiest people in South Korea.

The latest findings, meanwhile, showed Bill Gates as the wealthiest man in the world with his total value hitting $89.4 billion followed by Amazon CEO Jeff Bezos at $83.9 billion. 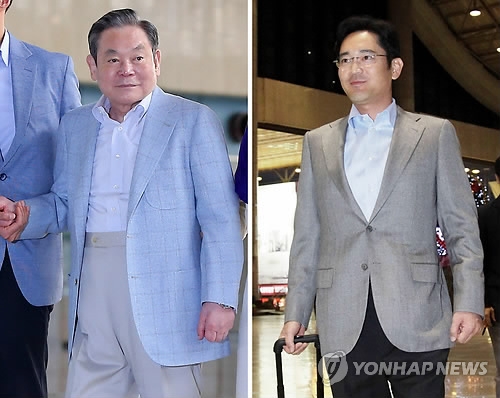