The total who transferred to a new service provider Friday hit 20,000, with the number rising to just under 24,000 on Saturday, data by local mobile operators said.

It said the number of transfers that are linked to purchases of new phones easily exceeded the average 15,000 that had been the norm in recent months.

Samsung Electronics Co. started selling the phablets, previously known as the Note 7, in its home market late last week. The large phones originally launched in the second half of 2016 were pulled from shelves after some started catching fire while being recharged.

The South Korean tech giant, following an exhaustive probe, determined there was a fault in the battery pack.

The Note FE comes with a smaller 3,200 mAh non-removable battery, with Samsung stressing it had tested all phones for safety. It announced some 400,000 units will be sold in South Korea.

Related to the market trend, an industry insider said there is considerable interest in the Note FE that sells for 699,600 won (US$606) here, which is roughly 300,000 won cheaper than when the phone was launched last year.

He said there are even signs of unlawful subsidies by some retailers.

Others said that with the launch of the Note FE, there are even signs of carriers offering more subsidies to flagship devices, such as the Samsung Galaxy 8 and Apple's iPhone 7 smartphone models. 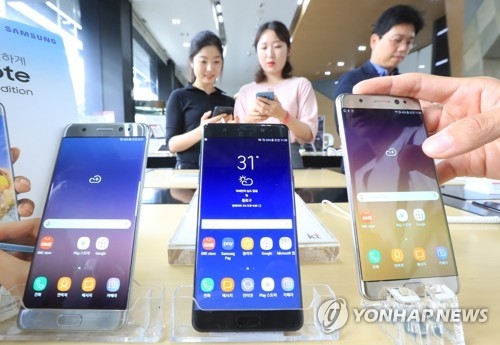