SEOUL, July 9 (Yonhap) -- Two people were killed and 16 others hurt following a pileup on Sunday on the northbound highway linking Seoul to the port city of Busan, police said.

Six passenger cars and a bus were involved in the crash on the Gyeongbu Highway near an interchange in Seoul's Yangjae area around 2:50 p.m., the police said the passenger cars collided on the rain-slick highway before the bus hit one of the cars carrying two persons that resulted in their deaths.

The two bodies were found in their wrecked car. At the time of the accident, there was a lot of rainfall, witnesses said.

The bus reportedly tried but failed to slow down on the rain-soaked road and eventually crashed into the cars that were ahead of it.

The police are currently looking into what exactly caused the accident, believing it could possibly be due to careless driving.

After the pileup, three northbound lanes and one southbound lane of the highway were closed. This caused heavy traffic congestion in the area. 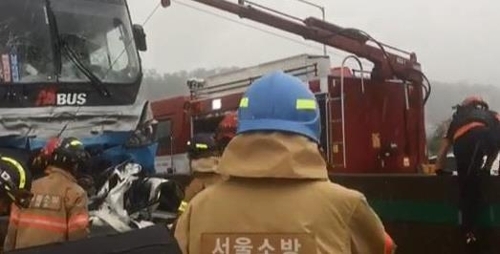