SEOUL, July 10 (Yonhap) -- North Korea is busy bracing for possible floods after it has been struggling to fight drought damage in its western provinces, its news reports showed Monday.

The country's northeastern areas were hit hard by massive floods in August 2016, prompting the country to shift its drive from hard work to flood recovery.

"We are aware that it is important to prevent floods from damaging crops. We are making efforts to tackle possible flooding and winds, together with fighting droughts," the state-run radio station reported, citing remarks by officials at the country's agricultural ministry.

North Korea has been stepping up the campaign to minimize the drought damage in the country's granary areas. It sent water-supply vehicles and pumping equipment to South Hwanghae Province, state media reported.

As the rainy season nears, the North is shifting its focus to preventing possible heavy rains from hitting the country's economy.

"According to the weather agency, the rainy season will begin in mid-July and strong winds are expected in some areas," the Rodong Sinmun, the main organ of the ruling party, said in its July 3 edition.

It called on North Koreans to build embankments and carry out other anti-flood measures in a bid to block farmlands from being submerged.

Last year, heavy rains pummelling North Korea's northeast areas are known to have left around 140 people dead and about 400 missing. North Korea called them the worst floods in over seven decades. 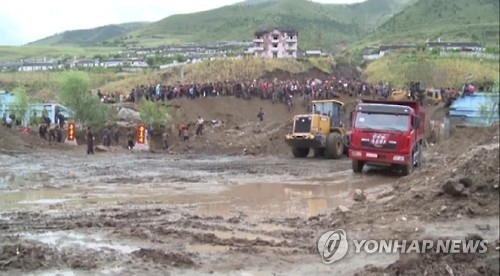