According to the Korea Housing-Finance Corp. (HF), the Korea-housing affordability index (K-HAI) rose to 58.9 in the first three months of the year, up 0.4 percentage point from the previous quarter. This is the highest since the fourth quarter of 2012, when the index stood at 59.9.

K-HAI reflects the burden of loan repayment for homebuyers with median income who purchase average-priced housing. Higher numbers indicate greater burden, with an index of 100 meaning that 100 percent of the income goes to paying back the principal of home-backed loans. 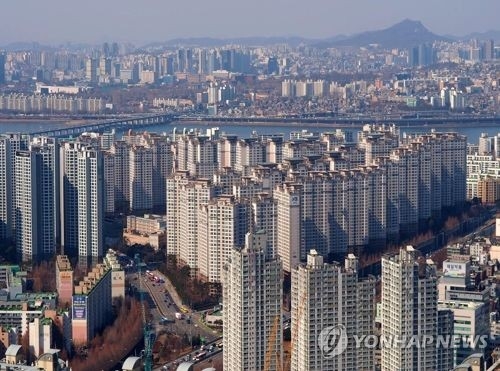 A separate measurement, the Korea-housing opportunity index (K-HOI), also indicated falling affordability of homes. This index counts the number of available homes for buyers with average income. A fall in the index means that the number of affordable homes is decreasing.

Real estate market watchers said the phenomenon has mostly to do with rising prices of homes and interest rates on mortgages.

The Korea Appraisal Board said housing prices rose 0.21 percent on-month in June, a much bigger jump than 0.14 percent in May. The pace of the rise was especially high for Seoul, increasing 0.66 percent in June, and for Sejong, a city south of the capital and home to many government ministries and agencies, whose numbers marked a 1.67 percent increase in June.

The interest rate on home-backed loans as of March this year was 3.21 percent, up 0.55 percentage point from August last year. This has forced households with home loans to use more than 30 percent of their earnings to pay back the principal.
(END)