SEOUL, July 10 (Yonhap) -- South Korea's new national football head coach is hoping to call up his players early for crucial World Cup qualifiers as he seeks help from the domestic pro football league and its clubs.

Shin Tae-yong, who took the helm of the men's senior squad last week, said Sunday that he'd be grateful if the Korea Football Association (KFA) and the K League, which governs the professional competitions, allow him to summon national team players earlier than scheduled.

In the final Asian qualifying round for the 2018 FIFA World Cup, South Korea are scheduled to host Iran on Aug. 31 and face Uzbekistan in Tashkent on Sept. 5 for the finale. The Taeguk Warriors are barely holding on to the final automatic qualification spot with 13 points, sitting just one point up on Uzbekistan in second place in Group A.

In Asia, the top two teams from Groups A and B can advance directly to the World Cup in Russia. Two third-place teams must go through a playoffs for their final chance.

Shin's side was originally scheduled to assemble at the National Football Center on Aug. 28, but if the coach's request is granted, the national team players will start training together on Aug. 21.

Kim Ho-gon, who leads the KFA technical committee, said he will find ways to help Shin, who is tasked with leading South Korea to a ninth consecutive World Cup appearance. Coaches in the first-division K League Classic said they are also willing to help the national team.

The K League said it will convene a board meeting to decide whether or not to accept an early call-up of the players after receiving an official request from the KFA.

Shin, who previously coached South Korea's under-23 and under-20 squads, watched K League matches over the weekend to check on the players for the senior team. He added whoever shows the best form will be selected, and that also applies to veterans like Jeonbuk Hyundai Motors forward Lee Dong-gook and Suwon Samsung Bluewings midfielder Yeom Ki-hun, who haven't played internationally for more than three years.

"I'm first going to watch the players who give their best for the full 90 minutes," he said ahead of the K League match between Suwon and Jeju United on Sunday.

The 46-year-old is also expected to announce his coaching staff this week. 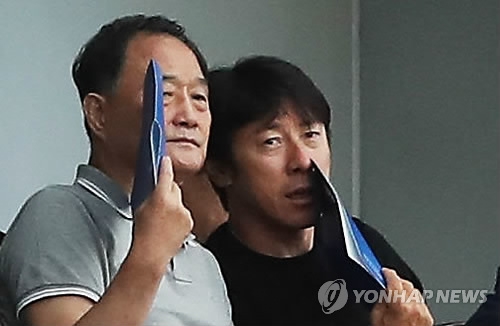