SEOUL, July 10 (Yonhap) -- The 2017 Major League Baseball (MLB) season began with four South Korean players on active rosters; the first half has come to an end with six in big league uniforms, with few bright spots up and down the list.

As the 30 big league teams closed out the first half Sunday (local time), St. Louis Cardinals closer Oh Seung-hwan has put up perhaps the strongest numbers among Korean players, with 18 saves and a 3.54 ERA in 38 appearances. But the right-hander, who was dominant in stretches last year while posting a 1.92 ERA in 76 appearances, hasn't been quite the same pitcher in 2017, as he has been worse than last year in virtually all statistical categories that matter.

Oh had an ominous start to the 2017 season, blowing a save after serving up a home run against the Chicago Cubs in the season opener April 2. Oh has blown three saves in 21 opportunities so far in 2017, after converting 19 of 23 chances last year. 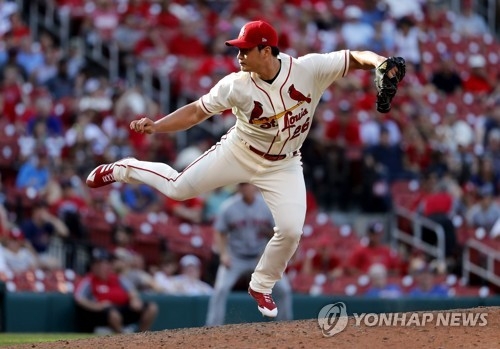 In 40 2/3 innings, he has already given up seven home runs, compared with five long balls in 79 2/3 innings last year. His strikeout rates are down and walk rates are up, and the opponents are slugging at a .442 clip off Oh, compared with .269 a year ago.

Los Angeles Dodgers left-hander Ryu Hyun-jin has also had an up-and-down season, as he is trying to work his way back from shoulder and elbow surgeries that wiped out his 2015 season and limited him to one start in 2016.

Ryu isn't throwing nearly as hard as he once did, and he was never a power pitcher to begin with. He has had to rely on changeups and curves to get through lineups, and it has led to some dicey moments.

With a 3-6 record and a 4.21 ERA, Ryu has been touched for 15 home runs in 72 2/3 innings. The home run total is already tied with his career high from the 2013 season, when he tossed 192 innings. Ryu was briefly dropped from the crowded Dodgers' rotation and even picked up his first big league save.

At the plate, Texas Rangers outfielder Choo Shin-soo has enjoyed the best first half among four South Korean position players.

The 34-year-old veteran, who made four trips to the disabled list last year, has mostly stayed on the field in 2017. And his improved health has led to better production across the board.

Batting mostly leadoff or second in recent weeks, Choo enters the All-Star break with a .250/.363/.410 line in 78 games, with 12 home runs, 42 RBIs and seven steals. Choo also leads the team with 49 walks and is second on the Rangers with 49 runs scored.

While he may never be the 20 homer-20 steal threat that he once was, Choo remains a serviceable option near the top of the lineup thanks to his on-base skills and occasional pop. 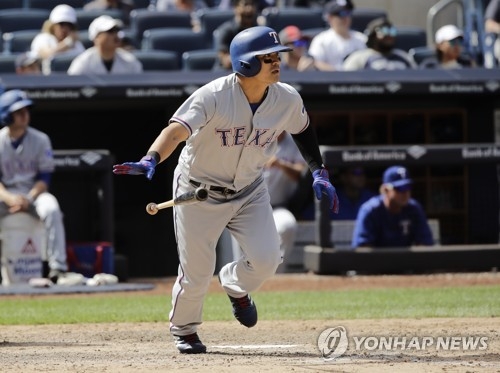 Baltimore Orioles outfielder Kim Hyun-soo had a frustrating first half, most of which he spent riding the pine.

In 2016, Kim went from being booed by home fans on the Opening Day to starting a playoff game in left field as a solid offensive contributor. But in 2017, Kim has been largely the odd-man out in the crowded Orioles outfield.

The O's converted rookie Trey Mancini, a natural first baseman, into a corner outfielder to keep his bat in the lineup. Mancini has responded with a .312/.354/.538 line to lead the club in each category, while hitting 14 home runs and knocking in 44 runs.

Kim, who bats left-handed, was mostly benched against southpaws last year, and Mancini has eaten into Kim's playing time against right-handers in 2017.

Two South Korean position players got called up from the minors late in the first half, both hoping for extended stays in the big show.

The San Francisco Giants brought up third baseman Hwang Jae-gyun in the last week of June, and he promptly homered in his very first major league game against the Colorado Rockies on June 28.

But the big league rookie has gone 5-for-27 in nine games since and ended the first half with a .194 batting average. The former Korea Baseball Organization (KBO) All-Star will have to pick up the pace if he's to receive some extra cash.

Longtime minor leaguer Choi Ji-man has been playing first base for the New York Yankees since last week. Choi hit a home run in each of his first two games in pinstripes and could get a long look at first base after the Yankees released veteran Chris Carter. The Yankees have used 10 different first basemen this season. 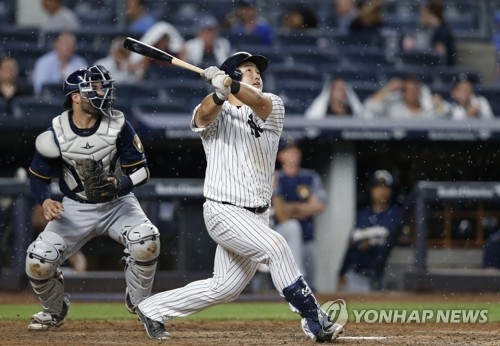 Two-time KBO MVP Park Byung-ho is still biding his time in Triple-A for the Minnesota Twins. The second-year player wasn't placed on the Opening Day roster despite leading the Twins with six home runs and 13 RBIs in spring training, and an early season injury further derailed the start of his 2017 campaign.

Park was batting below .200 through mid-June but ended the first half with a .243 average in 61 games. He has four home runs and 29 RBIs.

At least Park is still playing baseball. Pittsburgh Pirates infielder Kang Jung-ho, Park's former KBO teammate, has yet to appear in a game this year, as his status remains in limbo following a drunk driving conviction.

Kang received an eight-month jail term, suspended for two years, in March for fleeing the scene of a DUI accident three months earlier. Kang lost his appeal in May and has yet to get his U.S. work permit.

The Pirates have put him on their restricted list, which is for players who are unable to play for non-injury reasons, such as arrests or family matters. Kang will not be paid or earn major league service time while on this list. 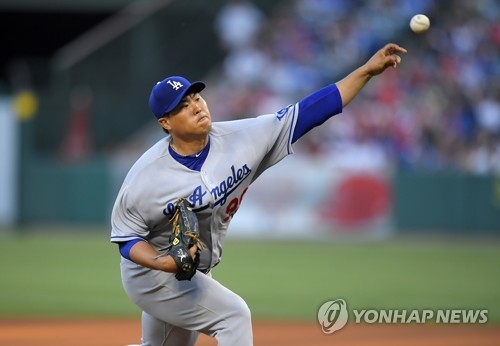 Few bright spots for S. Koreans in first half of MLB

Few bright spots for S. Koreans in first half of MLB