Ten of the 12 clubs in the K League Classic have played 19 matches so far, with only Jeju United and Gwangju FC completing 18. The first division operates a split system in which the 12 teams will be divided into two echelons after their first 33 matches and then play five more matches within their group.

Gangwon finished the first half of the season surprisingly in the No. 2 position in their return to the top-flight. They are tied with Ulsan Hyundai Motors at 32 points with nine wins, five draws and five losses, but had the edge on goals scored to take second place.

After earning a promotion from the second division K League Challenge, Gangwon made a splash in the winter transfer window by signing slew of local big names including the reigning scoring champion and MVP Jung Jo-gook and former Asian Football Confederation (AFC) Player of the Year Lee Keun-ho.

While there were concerns about teamwork, Gangwon proved lucrative signings worth the big investment as they stayed on the right track to earn an AFC Champions League (ACL) ticket for the 2018 season. In South Korea, the Korea Football Association Cup winners and top two teams in the K League Classic directly advance to the ACL group stage, while the third-placed team in the league must go through playoffs to join the top Asian club football competition finals.

Gangwon in the second half will try to fix their weak defense. Choi Yun-kyum's side scored 32 goals so far, only behind Jeonbuk's 34 goals, but the club also allowed 29 goals, tied for second worst in the league. To beef up their defense, Gangwon brought in hardworking South Korean midfielder Han Kook-young and Brazilian defender Gerson last week. 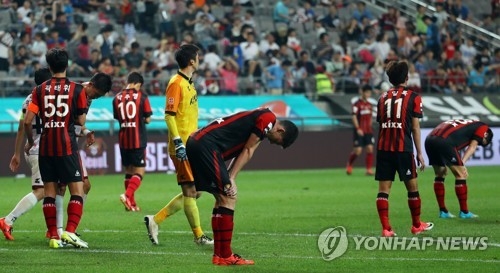 Gangwon will have to catch up to league leaders Jeonbuk Hyundai Motors who are at the top of the league table with 36 points.

Jeonbuk lost only twice last year, but in this first half of the season, they've already picked up three losses. The four-time champions, however, are still the dominant force as they are leaders in both goals scored and fewest goals allowed in the league.

Jeonbuk, the 2016 ACL winners, failed to complete a three-peat last season as they finished runners-up with a nine-point deduction following a bribery scandal that involved one of their scouts and referees.

Traditional K League powerhouses who struggled last season also seem to have found their old form to stay on the hunt for the top spot. Suwon Samsung Bluewings, four-time league champions who finished seventh last year, are in fourth place with 30 points, while five-time league winners Pohang Steelers, who finished No. 9 last year, are one point behind them in fifth place.

Jeju will join both clubs to chase the league championship in the second. Jeju were the only South Korean club to reach the ACL knockout stage this year, but got eliminated in the round of 16, meaning they will have to focus on their league campaign. 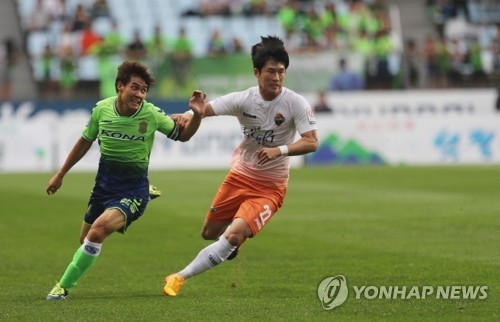 Reigning champions FC Seoul will try to get into the top six before the league splits into two groups in October. They are currently seventh with 25 points.

Seoul, however, are in a difficult situation as their new recruitment Lee Myung-joo, an energetic midfielder who joined Hwang Sun-hong's side on loan from the United Arab Emirates outfit Al Ain, will have to be sidelined for at least three months if he decides to go under the knife for an ankle injury.

No. 8 Jeonnam Dragons with 22 points and No. 9 Sangju Sangmu with 21 points will also try to collect more points in the second half to join the upper group, just like they did last season

Incheon United, Daegu FC and Gwangju FC will try to stay away from the relegation zone in the second half. In the K League Classic, the worst team goes directly to the second division, while the No. 11 team must face the playoff winners from the K League Challenge to remain in the first division.

Incheon last year survived in the Classic by finishing 10th at the last moment, but they've yet to show big improvement this year. They now have 17 points from a 3-8-8 record, just one point above Daegu and Gwangju.

Gwangju, last year's No. 8, can escape the bottom as they played one match less than Incheon or Daegu, but will need offensive efforts from the players. Gwangju scored only 15 goals in 18 matches, but hope their recent recruitment -- Northern Ireland international Niall McGinn – will strengthen their attack.