Ruling Democratic Party members pressed ahead with the submission of the bill, aimed mainly at creating jobs in the public sector, while the main opposition Liberty Korea Party, People's Party and Bareun Party refused to attend the committee session.

The submission of the bill, which the government sent to parliament more than a month ago, has been delayed amid a political standoff over the bill's legality and President Moon Jae-in's controversial personnel appointments.

An uphill battle lies ahead for the bill, as a sub-committee review to fine-tune it requires consent from a majority of the 50 committee members. The ruling party members total only 20.

The deliberation process has been delayed as opposition parties claim that the bill fails to meet the legal requirements.

They argue that an extra budget can be drawn up only in cases of war, massive natural disaster, economic recession, mass unemployment or crucial changes in cross-border relations. The ruling party and government, however, regard the current situation as posing high risks of mass unemployment.

Further complicating the process is conservative opposition parties' boycott of parliamentary proceedings in protest to Moon's appointment last week of Deputy Prime Minister Kim Sang-kon, whom they called unfit due to his alleged ethical lapses and ideological views.

The center-left People's Party has also joined the boycott amid a tiff over ruling party leader Choo Mi-ae's recent disparaging remarks about its leaders in connection to an escalating fake tip-off scandal. 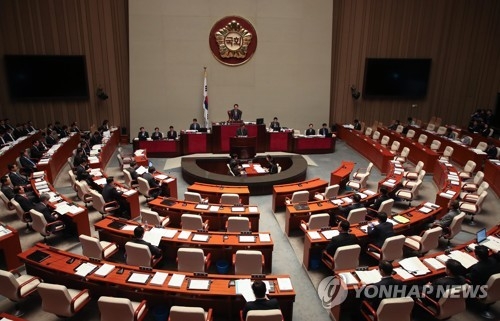