Sen. Chris Coons (D-DE) made the remark in an interview with MSNBC after a declaration of the G20 summit made no mention of the North. He criticized that Trump's "America First" foreign policy is "increasingly turning out to mean America alone."

"I'll remind you that President Trump's strategy for how to confront North Korea's aggressive nuclear weapons program, one of our top national security challenges, is to try to organize world pressure on China, to get China to put pressure on North Korea," the senator said.

"If that's the goal, then the outcome of many of the meetings and interactions that President Trump had with the G-20 did not advance that goal at all," he said.

Coons said that Trump's decision to withdraw the U.S. from Paris climate agreement, his "trumpeting nationalism and an economic isolationism, frankly did not go over well at the G20" held in Germany's Hamburg last week.

"The final communique makes it clear that on some key issues the United States is increasingly isolated," the senator said.

The G20 communique said that the Paris climate agreement is "irreversible" despite the U.S. decision to withdraw from the global pact aimed at reducing greenhouse gas emissions.

But the declaration made no mention of North Korea, even though the meetings came just a few days after the communist nation stunned the world with its first test-firing of an intercontinental-range ballistic missile. 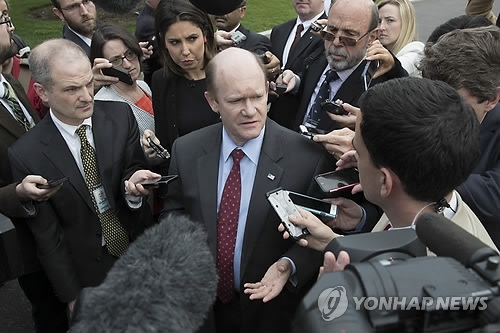 U.S. senator: Trump fails to use G20 to enlist global support to pressure China to rein in N. Korea

U.S. senator: Trump fails to use G20 to enlist global support to pressure China to rein in N. Korea