SEOUL, July 11 (Yonhap) -- The head of North Korea's missile development agency has been promoted to a colonel general after the country's first test of an intercontinental ballistic missile (ICBM), an analysis of media reports showed Tuesday.

Jang Chang-ha, president of the Academy of National Defense Science, was seen sitting next to leader Kim Jong-un at a performance with his military rank being raised by one notch from lieutenant general, according to Yonhap News Agency's analysis on photos carried by state media.

The promotion is seen as a reward for the agency's development of an ICBM, called the Hwasong-14, which North Korea test-fired last Tuesday, claiming that it can hit targets anywhere in the world. 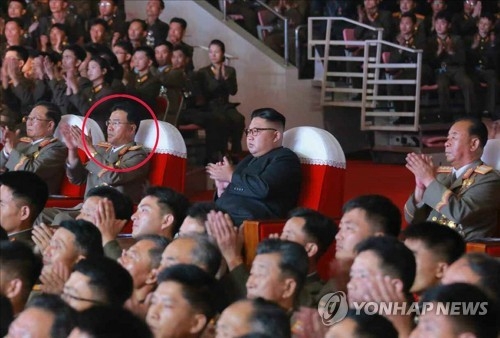 Jang's military rank was lieutenant general until he visited a memorial hall to pay tribute to late state founder Kim Il-sung on Saturday on the 23rd anniversary of his death. Given that the performance was held Sunday, he is presumed to have been promoted in between.

Jang was granted the title of the country's "hero," together with Choe Chun-sik, the then-head of the agency, in recognition of his role in launching a long-range rocket in December 2012.

Since late 2014, Jang has assumed the head of the agency, focusing on developing new ballistic missiles.

Ri Pyong-chol, a senior deputy director of the ruling party's Machine-Building Industry Department, is a general. Kim Jong-sik, an official at the Workers' Party of Korea (WPK), and Jon Il-ho are holding the military title of lieutenant general.

North Korean leader Kim and his wife, Ri Sol-ju, took part in a reception to celebrate its ICBM test Monday, according to the country's state news agency. It was arranged by the WPK's central committee and central military commission.

It marked the first time that Ri has appeared at a public event since early March.

Hwang Pyong-so, a top military official, said that North Korea should continue to bolster its strategic weapons both in quality and quantity.

Pyongyang should develop weapons to deal "a heavy blow to the U.S. and its vassal forces while not giving them a breathing spell until they bring the surrender document" to North Korea, the Korean Central News Agency said, citing Hwang's speech.