In a meeting with Lee Dong-geun, vice chairman of the Korea Chamber of Commerce and Industry (KCCI), 15 business leaders agreed with general calls that companies should overhaul themselves instead of dealing with stricter regulatory oversight due to unfair practices and lack of transparency, the KCCI said in a statement.

"Conglomerates and their affiliates are required to set up their own plans to resolve their own problems (when it comes to transactions and management structure)," Lee said.

The business leaders vowed to seek mutual growth strategies with their subcontractors and generate jobs through investments, the KCCI said. 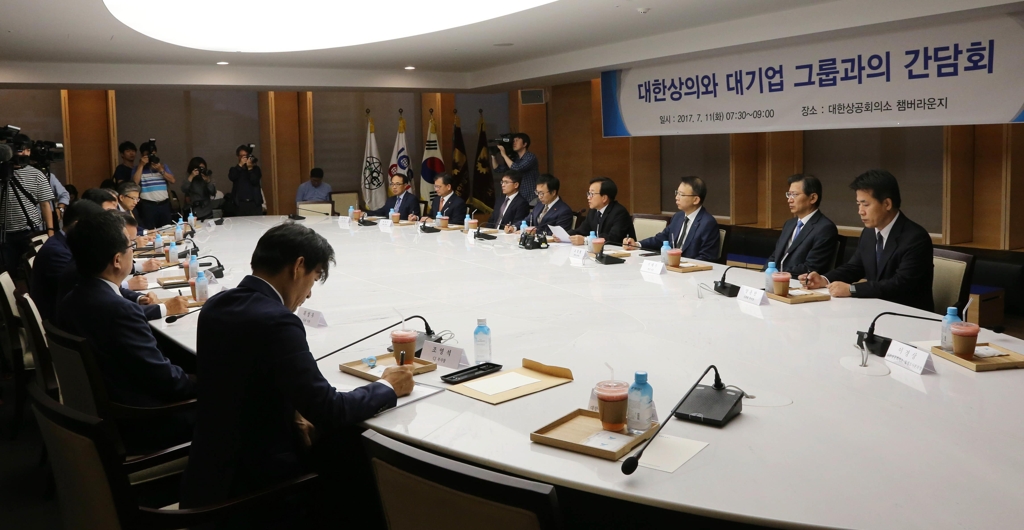 Early this month, leaders of the country's four biggest conglomerates already said they will seek a "positive (or voluntary) campaign" instead of facing new regulations in a meeting with new Fair Trade Commission Chairman Kim Sang-jo, a former civil activist known for advocating minor shareholders' rights.

The KCCI said it will recommend reforms to all local companies, big and small, in the coming years.

To push for the initiative, the business lobby said it will ask for a meeting between President Moon Jae-in and leaders of major conglomerates, as well as talks between chief executives, and heads of small and medium-sized businesses in mid-August.

(LEAD) Conglomerates pledge to voluntarily do away with unfair practices

(LEAD) Conglomerates pledge to voluntarily do away with unfair practices