SEJONG, July 11 (Yonhap) -- South Korea's exports shot up nearly 40 percent in the first 10 days of this month from a year earlier on robust overseas demand for semiconductors and ships, customs data showed Tuesday.

Total outbound shipments reached US$14.3 billion from July 1-10, up 38.5 percent from $10.3 billion tallied over the same period last year, according to numbers compiled by the Korea Customs Service.

The sharp increase was led by a 574.4 percent on-year surge in exports of vessels and a 50.4 percent gain in chips, with numbers for passenger cars and wireless devices backtracking 0.2 percent and 23.7 percent, respectively.

By country, exports to China rose 4.9 percent over the 10-day period from a year earlier despite Beijing's retaliatory moves against Seoul's plan to deploy a U.S. missile defense system on its soil. Shipments to Japan jumped 12.7 percent, and those to Vietnam vaulted 11.2 percent on-year.

But exports to the United States retreated 2 percent over the cited period amid the country's efforts to reduce its trade surplus with the world's largest economy.

Exports of Asia's fourth-largest economy have been on a roll since November last year on the back of recovering world trade and rising oil prices. 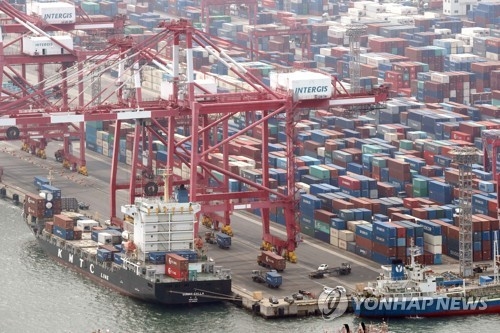