The decision followed a request from the ruling Democratic Party, whose floor leader Woo Won-shik stressed the importance of the opposition's support for many pending issues, including the government-requested supplementary budget. 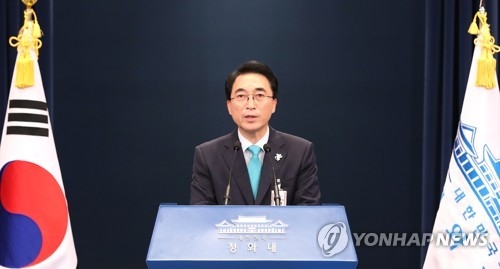 The spokesman did not specify how long the appointment will be delayed.

"During this period, the government will work to thoroughly explain to the opposition parties about the current situation where the new Moon Jae-in administration is unable to form its first Cabinet over two months after its launch," he said.

Opposition parties criticized that Moon is using a ploy to stall for time, demanding that he withdraw their nominations.

"(The delay) appears aimed at firstly checking how the opposition parties would react and secondly gauging public sentiment," Chung Woo-taik, the floor leader of the main opposition Liberty Korea Party, said during a meeting with senior party members.

Kim Dong-cheol, the whip of the minor People's Party, called the delay a "quick-fix solution." Kim, in particular, pressured Moon to explain why he has failed to deliver on his campaign pledge to exclude anyone involved in five kinds of irregularities, including plagiarism and tax evasion from senior public posts.